The University of Hamburg is known for its outstanding basic research and its transfer and applied research projects.

Within the Institute of Inorganic and Applied Chemistry in the university there are 8 research groups which are working on basic and application-oriented problems of molecular and coordination chemistry, catalysis, materials science, as well as theoretical chemistry. The Institute have avoided having to deal with the unreliability of helium supply due to the recent helium shortage, and instead have chosen a PEAK hydrogen generator to supply carrier gas for their GC analysis. They have ensured high purity hydrogen on demand is supplied to their instruments without having to worry about putting their analysis on hold due to an empty helium cylinder.

PhD student Patrick B. shares his and his team’s experience with PEAK and what generator they use in their lab. 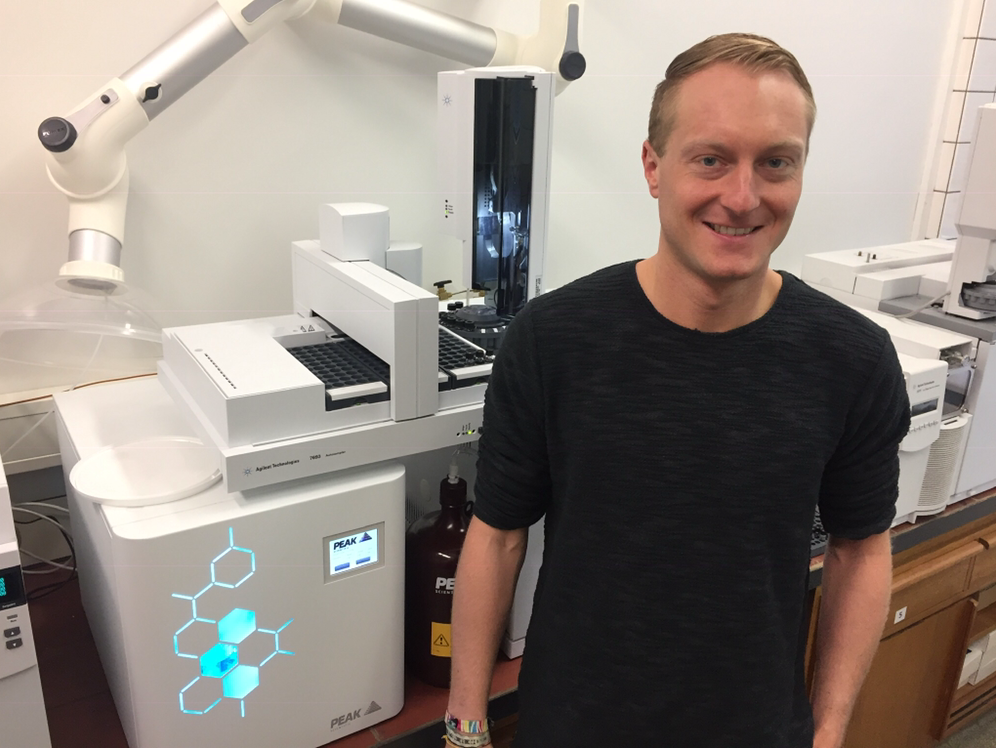 Patrick next to the Precision Hydrogen Trace 250cc generator

Typically what is the focus of your GC analysis - what sort of applications?

“As a university with leading basic and applied research in many areas, GC analysis is an integral part of our work. We work on a lot of different themes, so GC applications need to be as versatile as possible to suit all of our researchers.”

What PEAK Scientific generator do you have in your laboratory and what GC instruments does it supply?

“We operate an Agilent GC-MS with FID and use a Hydrogen Trace 250cc generator from PEAK. The university also has a few more Peak generators installed in different departments and faculties.”

What prompted you to choose a PEAK generator and how long have you used it?

“We have a colleague who had experience with Peak from working with another team in Regensburg and he made the recommendation. The design of the generator was able to meet our requirements and it was also able to nicely fit under our large autosampler. The cost played an important role in decision making and it was also essential for the university that the PEAK hydrogen generator is 100% compatible with the instrument manufacturer. We have been using it for about 10 months now.”

What has been the key benefit of deploying a PEAK generator as opposed to your previous gas supply solution?

“It was decided directly to install a hydrogen generator for the GC unit.”

Have you ever had a site visit from a PEAK engineer, if so, could you describe your experience of this support?

“So far we haven’t had an engineer visit. We had an issue with telephone communication in the beginning but it was positive that PEAK clarified the situation and worked things out in a customer-oriented way in order to find the most satisfactory solution possible.”

Would you recommend PEAK Scientific generators to other laboratories - and if so, what would be your main reason for the recommendation?

“Yes. We use the generator on a daily basis for our GC analysis and it works very well. We are confident in their performance and design.”

As one of the largest universities in Germany with leading basic and applied research in numerous scientific areas, the University of Hamburg have recognised GC analysis as an essential part of their work. Because of the nature of their research and the many different projects the teams work on, the university have utilized their GC for a number of applications. Patrick's team operate an Agilent GC-MS with FID which is supported by a PEAK Precision Hydrogen Trace generator. Due to the importance of their research, the university could not have compromised on their gas supply. They have made sure their hydrogen gas source is reliable, avoiding the persisting issue of the helium shortage which causes many labs to postpone vital experiments because they are not able to provide carrier gas to their instruments.

University of Hamburg was attracted by PEAK not only because the design of the Precision hydrogen generator is compact and modular, it could fit under their autosampler, but also because it met all of their requirements. PEAK's Hydrogen generator is a reliable lab solution which eliminates the risk of unpredictably rising cylinder and helium prices and offers peace of mind. The recent helium shortage is forcing some university labs to postpone analysis due to the unreliability of helium supply, and it is expected to affect a number of industries across China, Japan and Europe. The world’s helium supply could exhaust within a decade leaving millions of labs suffering. PEAK Precision’s hydrogen generator is the long term reliable solution to the helium shortage as it provides hydrogen on demand for GC analysis and it serves as a safe alternative to the highly pressurized helium cylinders. It stores minimal amounts of hydrogen at all times and operates at low pressure reducing the risks of explosion to a bare minimum.

Another key reason Patrick and his colleagues had chosen PEAK was due to its compatibility with the Agilent GC-MS instrument they are using. Where possible PEAK works with the major GC and LC-MS instrument manufacturers to ensure PEAK gas generator products are not only designed for those instruments but also to give the customer the assurance that the manufacturers themselves have tested and validated  the generators for use with their instruments. In this case the Precision Series is formally approved and recommended for use with Agilent GCs and that was key in the University of Hamburg’s decision making process.

The University haven't experienced a visit from one of PEAK's field service engineers yet, but they have been in touch with our team. And although they encountered a minor issue in communication at first, PEAK was quick to resolve the problem and provide a satisfactory solution at the end.

University of Hamburg have undoubtedly benefitted from using a PEAK Precision hydrogen generator to supply carrier gas for their basic and applied research. It has provided them with a safe supply of high purity hydrogen on demand to support their GC analysis, its compact and convenient design allows them to save valuable laboratory space and removes the uncertainty surrounding helium supply.

With the helium crisis developing due to the helium shortage there's no need to stress - one alternative is to use hydrogen gas on demand instead of helium. Check PEAK's method list to find out in which methods helium can be substituted.