The Flame Ionisation Detector (FID) detector is the most commonly used detector in Gas Chromatography with around 90% of GCs equipped with at least one. The FID can be used in almost any organic analysis, and is sensitive down to the parts-per-billion (PPB) range, which is the reason for its widespread use in GC analysis in areas from oil and gas, to food and pharmaceuticals.

The FID works by combusting hydrocarbons in a flame and detecting the current passed by carbon ions which results in an electrical signal. The change in current is dependent on the number of carbon atoms, or the amount of a compound, so we are able to quantify each compound (or peak) eluting from the column. A make-up gas is used to improve the movement of carbon ions through the detector, which improves the signal. However, it is important that the make-up gas is inert and does not contain hydrocarbons; otherwise this will dampen the signal, or increase the level of baseline.

The Precision series generators offer a perfect solution to supply the FID, providing hydrogen and zero air to create the flame, and nitrogen to supply make-up gas (Figure 1). The relative volumes of gas required for flame, flame support and make-up gas are 1 : 10 : 1, usually at flow rates of 40cc hydrogen, 400cc zero air and 40cc nitrogen. 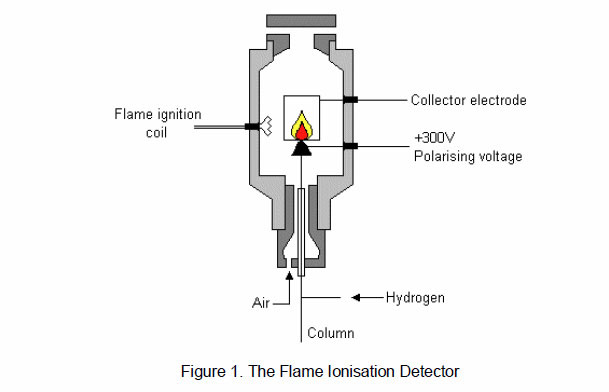 For the hydrogen supply we can use trace or standard hydrogen. The decision really comes down to cost and convenience, and the total volume of gas required since we can daisychain precision trace units together if the customer requires more than 500cc/min.

The use of zero air keeps the baseline low since any methane, which is detected by the FID and will increase the baseline height, is removed by the catalyst chamber. Because the FID requires a high flow rate of air for the flame, methane could have a large effect on baseline level.

Nitrogen for make-up can be standard or trace nitrogen. When using standard nitrogen, it is possible that the baseline will be slightly higher because any methane, or small hydrocarbons in the compressed air supplying the generator can pass through the system and affect the FID. In most laboratories around the world, the effect will be negligible, but in areas of high pollution or in labs with poor air ventilation systems, this effect may be more of an issue. In this case it would be a good idea to use zero nitrogen for the make-up supply. Thanks to its modular and compact, stackable design the Precision series offers a proven and practical solution for FID detector requirements, and if the laboratory is also using hydrogen or nitrogen for carrier gas, Precision can be a total GC gas solution.