Performance of Palladium Diffusers for Reliable Purification of Hydrogen

Several technologies are available for generating high-purity hydrogen, but palladium diffusers offer many advantages over the others.

Hydrogen generators are now becoming an essential component in many laboratories with increased gas consumption needs. Generators provide the convenience of having consistently high purity gas immediately available on demand and are considered by some to be preferable to cylinders, particularly in terms of health and safety, because of the concerns about having high pressure hydrogen in the laboratory working environment.

Generators typically contain less than half a liter of hydrogen gas, which is negligible when compared to the 9,000 liters of gas contained in a 50 liter high pressure cylinder. There are a number of hydrogen generator manufacturers producing quality instruments which provide ultra-high purity gas for a variety of applications including nanotube research, gas chromatography and in the semiconductor industry. Most people know that the hydrogen gas is produced from electrolysis of water, but is it as simple as that and why are generators so expensive?

Although there are a number of fiercely guarded secrets involved in the generation of high purity hydrogen by gas generators, there are only a small number of basic mechanisms by which hydrogen gas can be produced from water. Hydrogen generator systems typically produce purified hydrogen using a two-phase system. Hydrogen is first separated from water and then purified. Many hydrogen generators utilize proton exchange membranes (PEM) coupled with a hydrogen purification system such as palladium- diffusion or Pressure Swing Adsorption (PSA) dryers.

Proton exchange membranes used for hydrogen production effectively work like reverse fuel cells. Water is electrolyzed at the PEM, which is a solid polymer electrolyte that facilitates H+ ion transport, with O2- ions being retained and forming O2 molecules (See Figure 1.). Hydrogen ions are transferred by the PEM lattice through ion channels by a combination of three mechanisms known as surface diffusion, Grotthuss diffusion and vehicular diffusion.1 Proton transfer operates through the transfer of a proton across the membrane which is permeable to cations, but is not permeable to anions or electrons and the membrane is only able to transport hydrogen ions when it is hydrated.2 The hydrogen collected on the Cathode side of the cell then needs purifying. Purification can be achieved by a number of different methods. 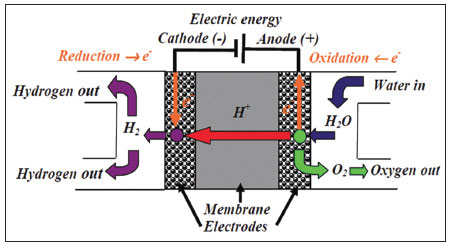 In a palladium electrolyzer, hydrogen separation/purification system, a palladium anode and palladium cathode comprising a bundle of tubes (See Figure 2.) are used to electrolyze water containing a soluble electrolyte (typically NaOH or KOH). Once an electric current is passed through the solution, Hydrogen ions diffuse through the palladium tube cathode producing ultra-high purity hydrogen gas. 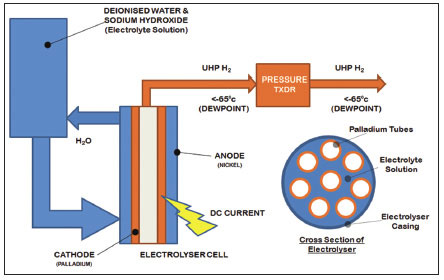 This system provides extremely pure hydrogen gas with minimal moisture and O2 carry over. However, the electrolyte in the cell must be periodically changed and this procedure means at least a 12 hour down time for the generator (including cooling and start-up time). When changing the electrolyte, the whole volume must be changed. Residual sulphur-containing compounds and unsaturated hydrocarbons can impair permeability of the palladium tubes to hydrogen ions that require periodic replacement.

Palladium diffusion membranes work through pressure-driven diffusion of H+ ions across palladium membranes. Palladium/Ag alloy membranes provide selective diffusion of hydrogen ions through the membrane at temperatures in excess of 300 °C, with impurities such as H2O, CO2 or CO unable to pass through and being retained on the inlet side of the membrane3. These impurities can later be vented to the atmosphere. Palladium diffusers can take on a number of forms, including an array of tubes, a coiled tube or membrane foil. Once the hydrogen ions pass through the membrane, they form diatomic hydrogen molecules that can be pressurized and delivered to the analytical instrument (See Figure 3.). 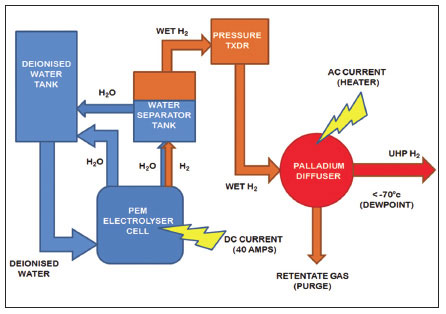 However, despite their ability to provide high purity hydrogen, Palladium- cells have a relatively short lifetime (3-5 years) and are susceptible to failure as a result of mechanical stress following changes in flow or impurities in the water supply or from embrittlement caused by dissolved hydrogen present in the membrane during power outages.3

To purify and dry the hydrogen, pressure swing adsorption works by alternating the flow of hydrogen through two parallel columns that are packed with a zeolite adsorbent material that acts as a molecular sieve (See Figure 4.), allowing the smaller hydrogen molecules to pass through, whilst retaining larger water molecules. While the hydrogen is purified as it passes through column A, a small amount of dry gas is bled backwards through column B to purge the retained water from the adsorbent material. When column A reaches an optimum level of adsorption, the process reverses, at which point column B takes over hydrogen purification with column A being replenished. The two columns interchange between hydrogen purification and column regeneration so that the system can produce an uninterrupted supply of purified hydrogen gas with negligible pressure fluctuations or pulsing effects. After each cycle is complete, the system is completely regenerated, meaning that no replacement of the material is necessary. 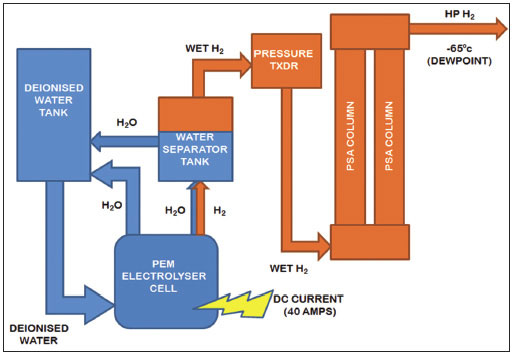 An alternative drying system to PSA that can be used in conjunction with PEM is the use of a silica desiccant system (See Figure 5.). This system simply involves passing the hydrogen produced by the PEM through a silica gel column to remove moisture. This system is cheaper than PSA or palladium drying systems and produces high purity hydrogen albeit with a higher moisture and oxygen content. This system is relatively low maintenance with only periodic changing of de-ionizer cartridges and desiccant columns necessary. 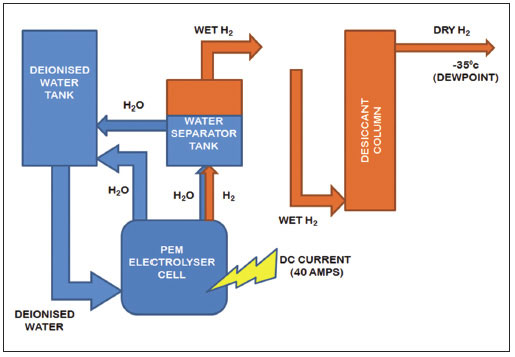 Evidence from research suggests that palladium purification systems produce the driest possible hydrogen1 but there are a number of pros and cons regarding the use of such systems. Through its selective permeability to H+, palladium is susceptible to embrittlement in the event of a power outage when H2 is present within the membrane at lower temperatures. Palladium cells operate at high temperatures and must therefore undergo elaborate start-up and shutdown sequences to avoid embrittlement and ultimately damage to the cell. Replacement of palladium cells is costly and their lifetime is relatively short.

PSA on the other hand has a number of advantages over palladium systems in terms of its robustness and minimal requirement for maintenance. PSA does not need to operate at high temperatures or with high electrical currents and involves minimal maintenance. Although the purity that can be achieved with PEM/PSA is slightly lower than that of palladium systems (6.0 vs. 7.0 quality), PSA systems require no shutdown procedure and the system can reach a level of high purity within 2-3 hours.

All four systems discussed here produce hydrogen gas at high purity whilst eliminating the need for hydrogen cylinders in the work place. The cost of a generator will generally be reflected by the quality of gas it produces and the technology required to produce it. Your choice of generator will usually depend on the application for which you need hydrogen and the purity of gas that this application requires.