Hydrogen gas is the most abundant element in the universe and essential to all life as we know it. Hydrogen gas generation is one of the most common processes and it is estimated to make up to 75% of matter in the universe by mass, including 70% of Jupiter’s constituent gases as well as being the primary nuclear fusion fuel that allows our Sun to generate enormous quantities of energy. On earth, it is the third most available element in the atmosphere - combined with oxygen it creates water (or H2O), a basic necessity of all life on this planet and combined with carbon, it gives us a vast array of organic compounds, used in the production of numerous modern necessities, from fuels to plastics, rubbers etc.

Officially hydrogen was discovered in 1766 by Henry Cavendish but had been created by many scientists inadvertently almost 100 years before this official discovery. Since then hydrogen gas has been used for numerous applications. In industrial manufacturing and processing, hydrogen gas is used in fuel cells for cars, for processing fossil fuels, in the production of ammonia, as a shielding gas in arc welding, as a rotor coolant in electrical generators and even as a fuel for rockets.

Contact us for more information on our Hydrogen Generators.  Get a Price Today

Another, less widely known, use for hydrogen is as a carrier gas in Gas Chromatography (GC) – an approach that has recently regained popularity as a replacement for helium, which has been the historic GC carrier gas of choice. Since hydrogen gas generator technology became more widely available, coupled with the increasing scarcity and resulting rising costs of helium, hydrogen gas generation has progressively become a much more viable option. Added to this, generators can deliver consistent & safe quantities of H2 gas to the GC instrument and its higher optimal velocity than helium allows for faster analysis time for many methods. Helium, unlike hydrogen, is a finite resource and must be mined. This means that its price is dictated by supply and demand creating uncertainty around its availability and the stability of its price.

The technology behind hydrogen generators has evolved over time, with the first models not being particularly sophisticated and often requiring users to add caustic solutions to the hydrogen generator in order to generate the hydrogen gas, which was neither safe nor practical. However, with several decades of development, technology has changed significantly. Today, lab hydrogen is typically generated through the electrolysis of deionised water by utilizing a Proton Exchange Membrane (PEM) cell and there is a decreasing requirement for users to handle dangerous substances in order to operate the generator.

A primary concern laboratories have had revolves around the revalidation of methods for use with hydrogen for their current analyses, many of which have been written with only helium as a carrier gas with some being imposed by governing bodies as a requirement to meet the standard operating procedures. This means that any change to carrier gas would first need to be validated, which can be a time-consuming and costly process. However, this is a changing landscape, as over the years, more and more methods are being updated to include the option of hydrogen as carrier gas and there is much more information available about how to undertake method translation.

Furthermore, whilst the time lost in method revalidation may cause reluctance to change GC carrier gas from helium, the Van Deemter Curve (Figure 1) clearly demonstrates hydrogen’s ability to vastly reduce analysis time. Therefore, going through the whole validation process is justified by the significant increases in workflow efficiency that hydrogen use can ultimately deliver in the long run. 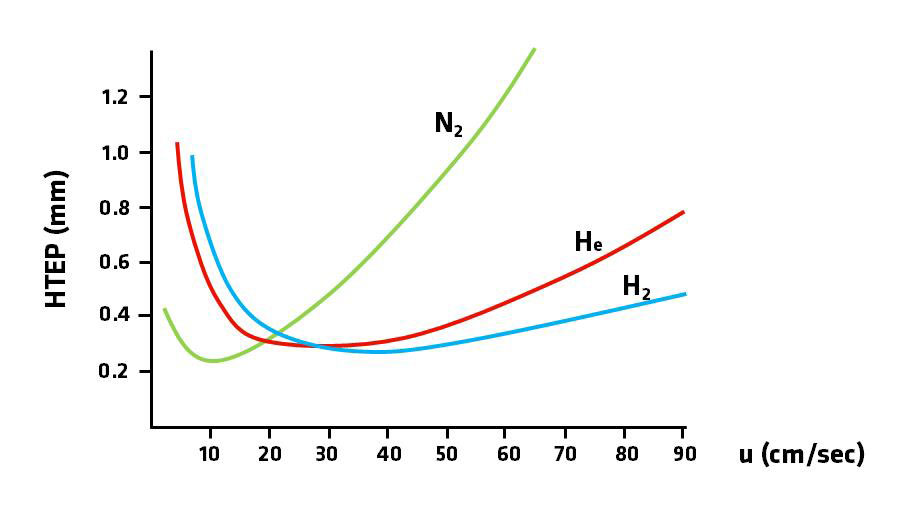 A further concern often cited by laboratories is around the safety of producing hydrogen on-site due to hydrogen gas’ explosive attributes. These concerns are mitigated by laboratory hydrogen generators as the quantity of gas produced is so small that it would take weeks for the hydrogen to air ratio to reach an explosive level in a standard lab, even without any ventilation, should a leak occur. Furthermore, Peak hydrogen gas generators come with enhanced standard safety features inbuilt, incorporating advanced warning & self-diagnostic systems, meaning that if a leak does occur, the generator would shut down production and let the user know an issue requires resolution.