As the cost and scarcity of helium rises, laboratories have begun to convert methods to hydrogen carrier gas.

USEPA Method 8270 [1] for semivolatiles is used by laboratories to measure a mixture of acids, bases, and neutrals in a wide variety of matrices. Sample extracts can range from clean water to sludge coming from Superfund clean-up sites. The complexity of these extracts demand a robust instrument that is easy to operate and maintain. Adding to method complexity is the uncertainty in both cost and supply of helium, forcing some laboratories to consider hydrogen as carrier gas. Hydrogen is not an inert gas; it is reactive and can be an explosion hazard if allowed to build up in either the GC oven or manifold of a mass spectrometer. The Bruker SCION Helium-free Package will ensure safe routine operation, with little or no performance change for EPA Method 8270. Bruker’s unique axial ion source design provides excellent robust operation and minimizes unwanted protonation and spectral distortions. In addition, the Gas Chromatograph with Bruker Split/ Splitless (SSL) injector and inert pathway prevent compound degradation and reactions with hydrogen.

The recommended instrument and operating parameters are listed in Table 1. When using hydrogen carrier for the first time, more hydrocarbon background is observed but will clean up over time. This initial background can be reduced significantly by increasing the ion source temperature to 350 °C, with hydrogen column flow at 4 mL/min and filament turned ON for 4 hours. Calibration standards were obtained from Restek Corporation, Bellefonte PA, MegaMix p/n 31850, containing 76 target compounds. The calibration for most analytes ranged from 1 to 200 ppm. Internal and surrogate standards were added at a concentration of 40 ppm. Solvent: Dichloromethane. A pulsed split injection was used to minimize contact and residence time of compounds inside the inlet. This is critical in hydrogen carrier gas, due to its low viscosity and tendency to react with dichloromethane and form HCI. Figure 1 illustrates the pulsed split injection technique with the Bruker SSL. The single goose-neck 4 mm open inlet liner is commonly used with Method 8270. It does not contain glass wool. Glass wool could contribute to compound degradation, especially when using reactive hydrogen as carrier gas. Figure 1: During the pulsed split injection, the inlet is set to 40 psi with split flow at 70:1. Under this condition, the column flow is near 5 mL/min, allowing rapid transport of analytes to column.

In order for hydrogen carrier gas to be considered for use, Method 8270 specifications in terms of tuning, resolution, calibration, peak shape (Gaussian Factor), and system performance checks (SPCCs) must be met. In addition, the solvent specified in the method is dichloromethane (DCM), therefore essential to minimize degradation in the inlet.

The GC/MS system must also produce mass spectra that match NIST library and demonstrate robust operation in heavy matrices. The SCION with Helium-free Package can be auto-tuned normally and used with the tune-to-target feature for passing DFTPP tune. Figure 2 illustrates a DFTPP spectrum and report generated with the EnivroPro™ software.

The viscosity of hydrogen changes at a much slower rate vs. temperature than helium, and is an advantage for maintaining good solubility in the stationary phase during the GC oven ramp. Also, at a flow of 1.0 mL/min using the 20 meter 0.18 mm ID column, an optimal linear velocity for peak separation is maintained. This assures that the peak resolution criteria in the method is met, as illustrated in Figure 3 for Benzo(b) and Benzo(k)fluoranthene. The peak Gaussian Factor or peak Tailing Factor for Pentachlorphenol demonstrates the inert behavior of the system. 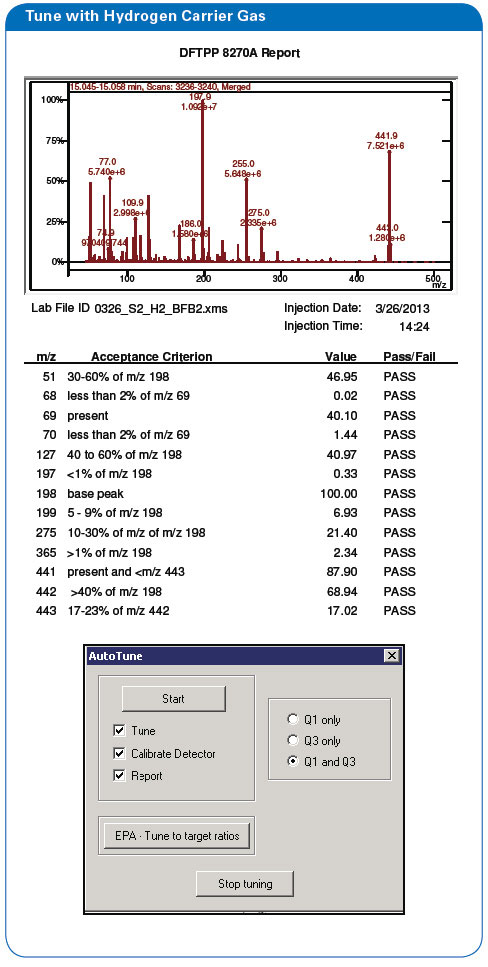 The SPCCs and initial calibration criteria are also met with hydrogen carrier. For the SPCCs the relative response factors (RRFs) are measured and compared to the criteria given in Table 2.

An example calibration curve of Hexachlorocyclopentadiene is shown in Figure 4, with % RSD and corr. coefficient (r2) for this compound of 3.9% and 0.9998, respectively. 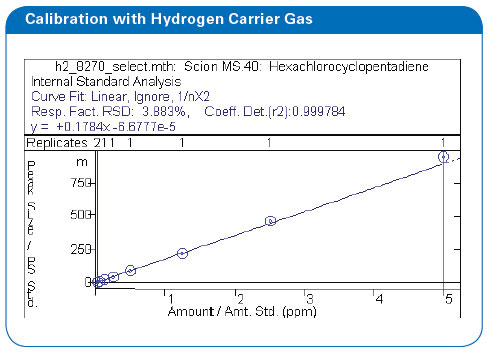 Figure 4: Calibration curve for Hexachlorocyclopentadiene with % RSD and corr. coefficient (r2) of 3.9% and 0.9998, respectively.

The overall average % RSD of all 76 compounds was 8.5%. Calibration for the critical quality control (QC) check and SPCC compounds are listed in Table 3, along with some %RSDs shown for very active compounds in Figure 5. 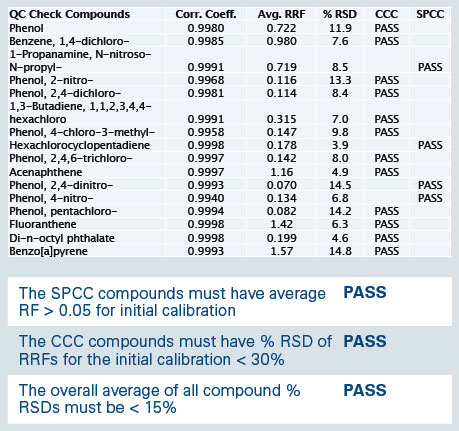 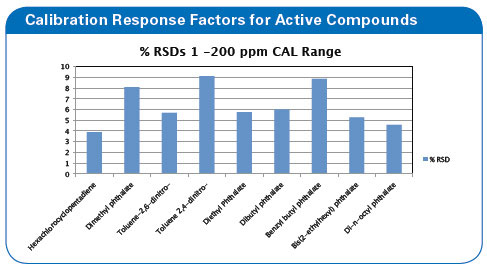 Spectral quality may be problematic using hydrogen because unwanted protonation or other reactions in the ion source are possible. The Bruker axial ion source design with Helium-free Package minimizes these reactions, as evidenced by good quality library matches to NIST. During this study, all 76 compounds were detected using automated AMDIS deconvolution/library search against NIST 11. Figure 6 illustrates example library match hits at 900+ for 1,2,4-Trichlorobenzene and Dibutyl phthalate. 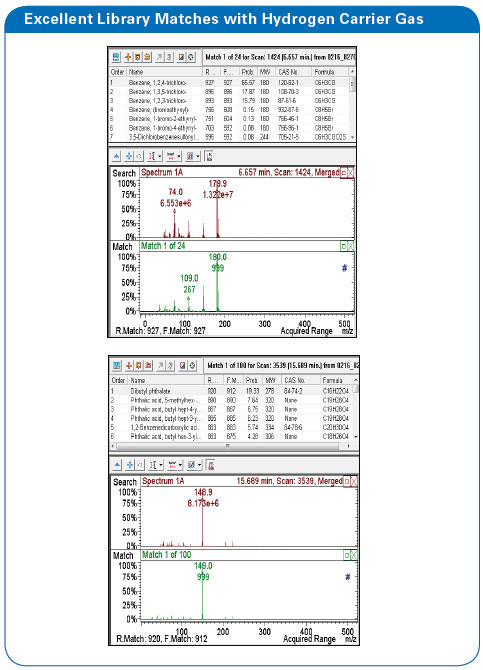 Method 8270 performance was tested using repeated injections of a contaminated sludge extract. A total of fifty injections were made, with an injection of the continuing calibration check (CCC) after every 10 extracts. The calculated concentration of the surrogates (target 40 ppm) and the % differences in response of the compounds were compared to the initial injection and then plotted. Figure 7 shows a TIC of the sludge extract. Figures 8 illustrates an example surrogate (2,4,6-Tribromophenol) and Figure 9 shows percent differences observed for the CCCs. As can be seen from the plots, excellent robust operation of the SCION Select SQ is maintained with hydrogen carrier. 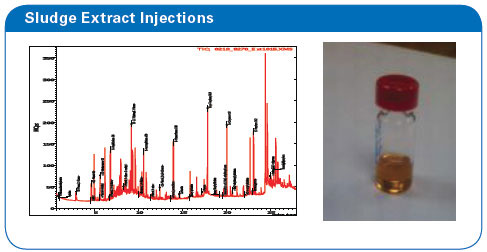 Figure 7: A Method 8270 sludge extract (right) was injected 50 times. A CCC was injected between every 10 extract injections for monitoring the % difference of surrogate and CCC compounds. Figure 9: Target concentration = 20 ppm. The plot shows the average % difference for the base neutral and acid compounds in the CCC mixture over 50 matrix injections.

Method 8270 is a challenging method covering a wide variety of compound classes and matrix types. As the cost and scarcity of helium rises, laboratories have begun to convert methods to hydrogen carrier gas, due to the ability to safely produce it on demand with generators. Since hydrogen is a reactive gas and can develop explosive build-up in certain situations, a GC/MS solution must be safe and also produce data that pass both the qualitative and quantitative aspects of the method. The Bruker SCION Select SQ has demonstrated excellent performance for Method 8270. The axial ion source, as well as the pulsed-split injection technique with the Bruker SSL, was shown to produce excellent library-searchable mass spectra, passing quality control criteria, and robust operation in heavy matrices.

PEAK Scientific for use of the Precision 500 TRACE Hydrogen Generator