With La Tomatina the ‘world’s biggest food fight’ just around the corner, thousands will be making their way to the town of Bunol (near Valencia) Spain to participate in this tomato throwing frenzy.

Trucks filled with tomatoes make their way to the town from the Western Spanish region of Extremadura and the firing of a water cannon signals the beginning of the fight.  After one hour the fight ends and a major clean up begins with fire trucks spraying down the streets so the town to return to normal. Throwing tomatoes at passers-by does sound extremely good fun, and also a tad rude, but if you are not able to attend the event you are more likely to eat the tomato rather than throw it. That being said do you find the tomato you throw into your salad or onto your sandwich full of flavor?

According to a recent Chromatography Today article, Researchers at the Agricultural Research Service — part of the US Department of Agriculture studied the effect storage conditions had on tomatoes and the effect blanching had on the taste of the fruit. The team studied conditions like room temperature as this represents the standard handling parameters in the home or in a food service kitchen. The tomatoes were cut and their flavor profiles were analyzed by a gas chromatograph and an electronic nose. 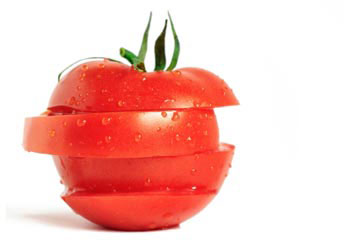 The results indicated that there are 42 volatile compounds that contribute to the flavor of a tomato. Compared to the control tomatoes, the refrigerated samples overall volatile levels reduced by 68% and 25 of the flavor compounds were found at lower levels. The blanched tomatoes gave similar results; 22 flavor compounds were reduced with an overall reduction of 63% in the volatile levels. These results suggest that tomatoes should be stored at room temperature to maximize the flavor and the juice they contain.

GC analysis is widely used in applications involving food analysis. Typical applications pertain to the quantitative/qualitative analysis of food composition, natural products, food additives, flavor/aroma components, even food packaging – the list is endless.  An important factor for the scientists or analysists to consider is the gas that feeds their gas chromatograph. In order to achieve accurate results in a fast and efficient manner they must ensure they have a consistent and reliable source of gas. Gas can be provided in helium cylinders and bulk storage or a hydrogen or nitrogen gas generator. A laboratory gas generator from PEAK Scientific can offer a reliable, consistent on-demand source of gas for analysis. It trumps traditional gas sources as you will no longer run out of gas during your analysis, gas is produced on-demand, eliminating health & safety concerns when it comes to gas handling & storage and it also means no more switching over empty cylinders which interrupts analysis.

PEAK understand that labs need to run at full capacity with minimal downtime, that being said the Precision series of gas generators have been designed specifically for GC applications. Combining convenience and reliability in a stackable and modular design, Precision is the safe and practical GC gas solution for hydrogen, nitrogen and zero air in your lab.