Qatar, the world's second largest helium producer, has been forced to close it's helium production plants after Saudi Arabia closed its border with Qatar, blocking overland exports of the gas.

The Qatar helium market has come to a standstill,  no small thing considering that the Qatar Helium 2 project is the world's largest helium refining facility, able to produce 1.3 billion cubic feet of helium a year and, until now, positioning Qatar as the second-largest helium producer in the world. The instant 25% reduction in production of the finite gas will affect supplies globally - prices have started to rise again (prices in places like North America had already been rising rapidly without the added backdrop of a helium shortage, with January 2017 bringing a price rise from Praxair of 15%)  and some gas suppliers have already started making preparations to cease the supply of 'uneccessary' helium, i.e. for balloons. Helium is widely used accross many industries and is currently used as a coolent in both MRI scanners and satellite instruments.

Another popular use for helium is to supply laboratory instruments such as Gas Chromatographs. These instruments are used for analyzing compounds in a wide variety of fields from Medicine and Pharmacy, to Food and Electronics. The good news for those using helium for Gas Chromatography (GC)  is that they can switch from using helium gas to using hydrogen gas. In fact, hydrogen has been proven to produce faster results for GC and it is not a finite resource affected by dwindling and unreliable supplies and rising prices. Hydrogen generators make it possible to have your own in-house supply of gas which never runs out, completely removing the worry of securing an adequate gas supply.

Switching from helium to hydrogen is easy, you can read our step-by-step guide on doing just that here. 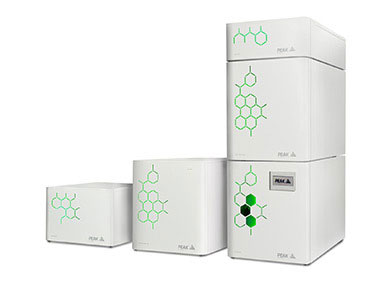 If you use Helium for your GC analysis, there has never been a better time to switch to hydrogen. With a quarter of the world's supply unavailable while Saudi Arabia, the United Arab Emirates, Egypt and Bahrain cut diplomatic and transport ties with Qatar, creating great unease in the global helium market, helium supply has never been more unstable.

To get peace of mind for your GC
Click Here

Qatar Blockade - It's time to switch to hydrogen

An unrealiable supply and possible helium shortage isn't the only reason to ditch helium cylinders in favour of a hydrogen or nitrogen gas generator, cylinders contain large quantities of gas at high pressure and therefore present a potential health and safety problem. Not only must the cylinders, which are fairly heavy, be periodically moved, but an accident can release a large volume of gas into the lab environment, which could prove fatal. Changing cylinders can also allow air and impurities into the analytical instrument, and new cylinders must be monitored, ordered and swapped out, taking up valuable time of lab personnel. The other potential problem with cylinders is inconsistency in purity from cylinder to cylinder. Impurities collect at the bottom of the cylinder meaning that the last 10% of the gas is not of as good a quality and is not recommended for use. In addition to these factors, there is the transportation of cylinders which are usually transported by road and therefore add to street congestion and pollution.

All of these problems can be solved with a gas generator, a safe and convenient way of providing a constant and consistent supply of gas for lab applications, without risking the safety of lab users.

Finally, it is worth noting that whilst Qatar has the option of resuming helium production, it is likely that sea routes will be blockaded if the sanctions against Qatar remain in place. With alternative routes out of the region being much less reliable and more costly it is easy to assume that, even if production starts up again, helium prices will likely still rise and supply may not always be able to meet demand.

Streamline your GC analysis with Precision

Gas cylinder prices on the rise