On Tuesday the 15th of December, PEAK Scientific hosted a GC webinar.

Hosted by First Source Laboratory Solutions and delivered by Dr. Ed Connor, GC Product Specialist at PEAK Scientific, the webinar's focus was on the rising cost of helium and the benefits of switching GC carrier gas from helium to hydrogen. Despite being aimed primarily at the Indian market for GC, the webinar's content was certainly relevant the world over.

Providing a detailed analysis of the world's current reserves of helium, its availability to the global market and recent price increases, Ed paints a picture of the decision that many labs are now facing, having to replace their traditional helium cylinders with a more economical viable solution. Ed shows how this can be done, without compromising the integrity of the lab's analysis. 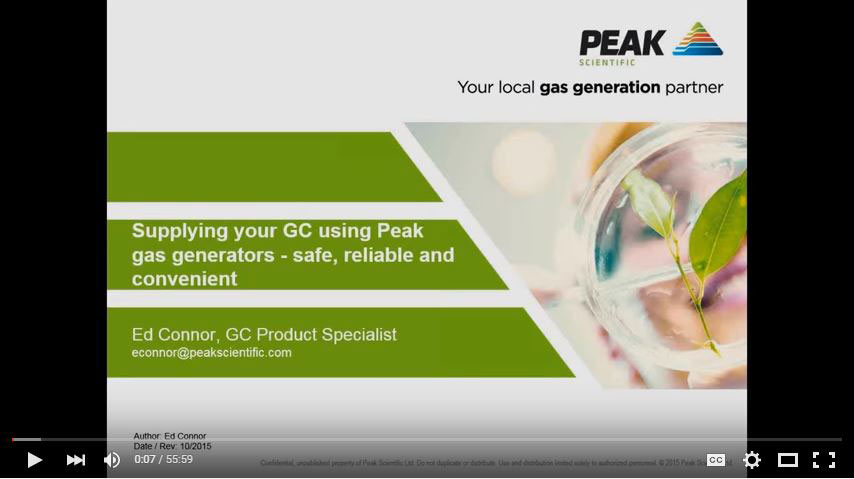 Ed goes on to look at the impact of changing from helium carrier gas to hydrogen or nitrogen, the choice typically being driven by the type of analysis being performed by the GC, as well as looking at why a gas generator is a more efficient way of supplying gas to the laboratory than a cylinder.

Detailing PEAK's Precision series generators as the ideal on-site, on demand gas generation for GC, Ed concluded the webinar with a question and answer session, assisted by GC Product Manager, Greg Stringfellow. The attendees of the webinar certainly got an insight into how to improve their analysis with PEAK Scientific Precision gas generators.

Missed the webinar? It can be viewed on the PEAK Scientific YouTube Channel for FREE.

The webinar received universally great feedback so be on the lookout for our next webinar in the not too distant future.