The gas separation process in (Pressure Swing Adsorption) PSA nitrogen generators  is based on the ability to fix various gas mixture components and particles by a physical solid substance. These are called adsorbents.

The gas separation process in PSA nitrogen generators is based on the ability to fix various gas mixture components and particles by a physical solid substance. These are called adsorbents. 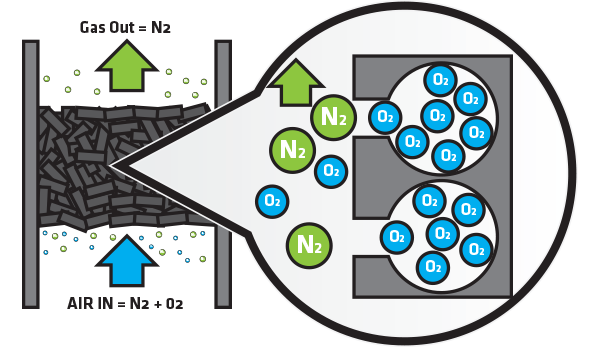 The technology of air-to-nitrogen generation with the use of adsorption processes in PSA nitrogen generators is well studied and widely applied at industrial facilities for the recovery of high-purity nitrogen. This is then used in many industries from food packaging to supporting laboratory instrumentation such as Liquid Chromatography Mass Spectrometry (LC-MS) and Gas Chromatography (GC).

The swing adsorption process in each of the two adsorbers consists of two stages running at intervals of a few minutes. At the adsorption stage oxygen, moisture and carbon dioxide molecules diffuse into the pore structure of the adsorbent whilst the nitrogen molecules are allowed to travel through the adsorber–adsorbent-containing vessel to be delivered as high purity nitrogen to the application.

Nitrogen generators allow for continuous operation 24/7, giving you an uninterrupted flow of gas when it's needed.

By substituting out-of-date cylinder technology, on-site nitrogen production savings largely exceed 50% for a typical LC-MS application. The net cost of nitrogen produced by nitrogen generators is significantly less than the cost of bottled or liquefied nitrogen.

On-site generators are highly resistant to vibration and shocks, chemically inert to greases and moisture insensitive. With proper, planned, in most cases annual, maintenance a generator can easily last a decade or more.

A gas generator purchase can be a significant initial purchase. However, labs can quickly recoup the initial cost through savings of alternative supplies of gas (such as nitrogen cylinders) in less than 12 months.

Purity is directly related to flow rate. High purity-high flow rate nitrogen generators are more expensive, nevertheless the solution will still be cheaper in the long run when compared with bulk gas supply.