Whilst working at the grounds of Romsey Abbey in October 1839 the gravedigger Mr J Major work came to an abrupt halt when his pickaxe hit something hard.

The object in question was a lead coffin. After further inspection the coffin was found to contain a full head of human hair which had been preserved due to the lining of the coffin. The head of hair was encased and is now displayed in the Abbey, resting on the oak ‘pillow’ on which it was found.

More than a century and a half later, local pupil, Jamie Cameron, visited the Abbey on a school trip and was intrigued by the hair in the display case. This curious exhibit helped persuade Jamie to pursue a career in archaeology. Jamie, now 23 years old, returned to the Abbey in 2016, after studying as an archaeological scientist at Cambridge and Oxford to try and find the answer to the question that had played on his mind for years – who did the hair belong to? 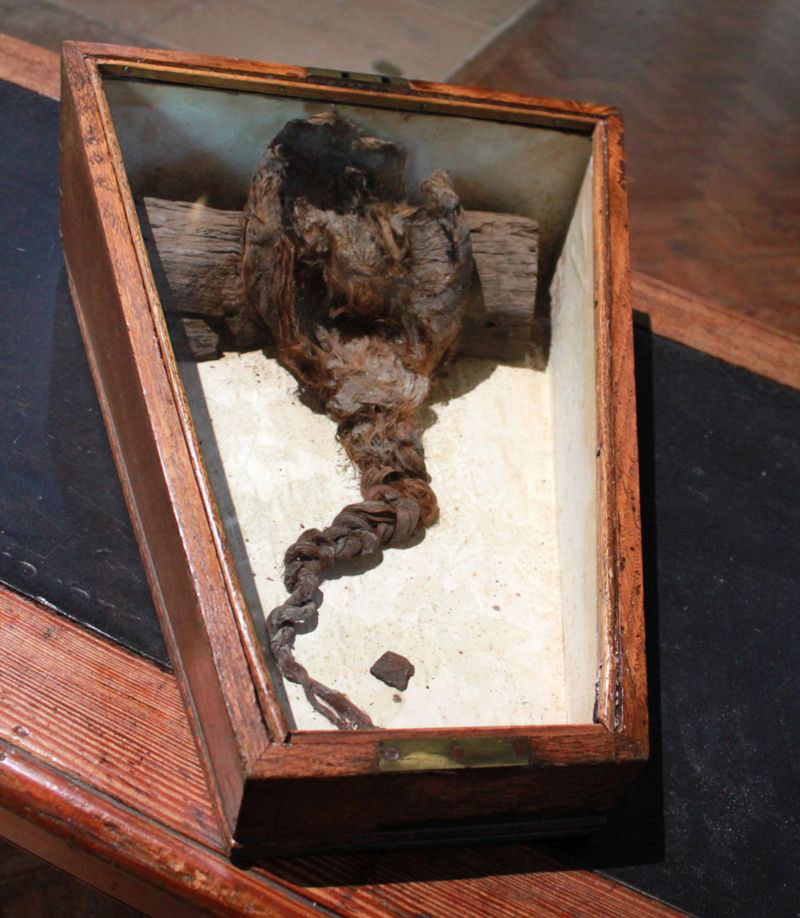 Hair found at the Abbey

There have been theories about the hair which might have belonged to someone of significant status (due to the lead lining of the coffin) and many believed it could have been one of the two saints, St Morwenna who was the first abbess or St Ethelflaeda, who is the Abbey’s patron saint.

Using GC-MS and working alongside a team of archaeological scientists at Oxford University's "Relics Cluster”, Jaime and his team were able to identify that the hair revealed traces of pine resin and marine protein which could come from fish, suggesting a seafaring person. The fact that this person had a marine diet could be very specific to perhaps members of the monastic community. Frank Green, archaeological advisor to the Abbey stated that:

“The context of the burial, in what would have been the south transept of the previous building right against the abbesses’ doorway, strongly suggests it’s someone linked to the monastic community.”

While the analysis has identified key information on the deceased, unfortunately science has not advanced far enough that we are able to provide a conclusive answer to the question. What is evident, however, is that using GC-MS analysis Jamie and his team were able to get closer to the truth and help answer part of the question he had as a child.

Specifically designed and engineered for GC applications, the Precision series represents the cutting-edge of PEAK Scientific innovation in robust and dependable gas generator design. Combining convenience and reliability in a single space-saving stack, Precision is the safe and practical GC gas solution for hydrogen and nitrogen in your lab.