GC and the world's most foul smelling fruit

Scientists have been researching what gives the Durian fruit its distinctive foul smell using GC techniques for odor analysis.

With its name deriving from the Malay/Indonesian word Durio meaning "spike", the Durian is renowned for its divisive smell - many finding its smell an inviting fragrance whilst others simply detest it. Few sit on the fence when it comes to the Durian smell.

The unique qualities of the Durian fruit were best described by British naturalist Alfred Russel Wallace in 1856 when he remarked:

"The five cells are silky-white within, and are filled with a mass of firm, cream-coloured pulp, containing about three seeds each. This pulp is the edible part, and its consistence and flavour are indescribable. A rich custard highly flavoured with almonds gives the best general idea of it, but there are occasional wafts of flavour that call to mind cream-cheese, onion-sauce, sherry-wine, and other incongruous dishes. Then there is a rich glutinous smoothness in the pulp which nothing else possesses, but which adds to its delicacy. It is neither acidic nor sweet nor juicy; yet it wants neither of these qualities, for it is in itself perfect. It produces no nausea or other bad effect, and the more you eat of it the less you feel inclined to stop. In fact, to eat Durians is a new sensation worth a voyage to the East to experience. ... as producing a food of the most exquisite flavour it is unsurpassed." 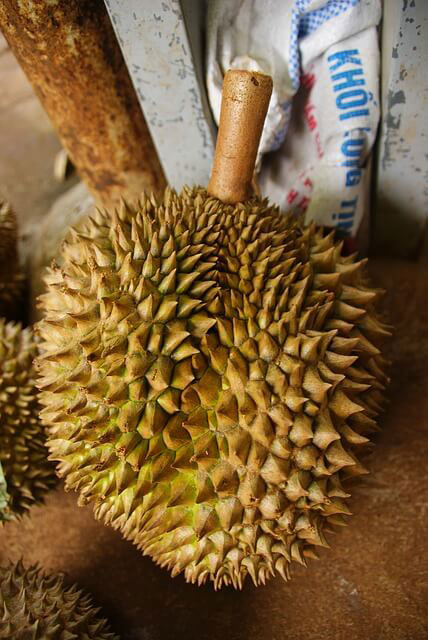 It is these unique qualities which make the Durian fruit highly attractive to researchers interested in fragrance and odor analysis as understanding the constituent parts of this unique smell could provide potentially numerous new fragrances for foods and even perfumes.

As published in the Journal of Agricultural and Food Chemistry paper entitled "Insights into the Key Compounds of Durian (Durio zibethinus L. ‘Monthong’) Pulp Odor by Odorant Quantitation and Aroma Simulation Experiments" researchers in Germany have found that there are at least 19 different ingredients which contribute to the Durian fruit's odor. Volatile compound samples from the fruit were analyzed using GC-O (Gas Chromatography-Olfactometry) techniques, the GC effectively separating the volatile compounds whilst the Olfactometer used to identify odors specifically for humans.

The research team were also able to recreate the smell using these compounds but interestingly, they only required two of the compounds, ethyl (2S)-2-methylbutanoate and 1-(ethylsulfanyl)ethane-1-thiol, in order to achieve this.

Journal of Agricultural and Food Chemistry