Many labs are facing helium supply difficulties and rapid price increases as a result of the helium shortage. Lab managers are therefore looking for alternative carrier gases and for many GC applications, hydrogen provides an excellent alternative to helium. Using a hydrogen generator can supply gas to a whole lab and at the same time remove the danger of storing hydrogen in the lab. Laboratories that switch gas supply from helium to hydrogen can see a number of benefits including reduced overheads, faster throughput and even improved separations.

Hydrogen is already used as a flame gas for FID detectors, one of the most commonly used GC detectors, however, the perceived health and safety risk of hydrogen means that many laboratories are now prohibited from having hydrogen cylinders in the laboratory. The safety concerns regarding placement of hydrogen cylinders in the laboratory stems from the large volume they contain (a 50 litre cylinder contains around 10,000 litres of pressurised hydrogen) and the dangers associated with moving heavy cylinders around. The high volume of hydrogen present in cylinders is a potential danger since a volume of 4% hydrogen in air equals the minimum threshold (lower explosion limit) for hydrogen ignition1. Hydrogen can also undergo auto-ignition if it is rapidly released into air2. Possibly the biggest problem facing users of hydrogen cylinders is cylinder to cylinder variation in hydrogen quality. Changing empty cylinders can interrupt GC operation, introduce contaminants into the system as well as inconveniencing the user. Cylinders are also large and can take up a considerable amount of lab space.

Gas generators, on the other hand have a relatively small footprint, contain a very low volume of hydrogen at any one time (less than 1000cc) and are able to produce gas on-demand to simultaneously supply carrier and flame gas to a number of GCs. The purity of gas produced by a hydrogen generator is often of higher purity than cylinder hydrogen. In addition to these features, hydrogen generators typically have forced air ventilation to prevent mixing of hydrogen and oxygen within the generator and an alarm system in case of low or high pressure. These features along with in-oven leak detectors supplied by hydrogen generator suppliers and emergency inlet shut-down features of GCs mean that laboratories should be quickly alerted in the event of a hydrogen leak. 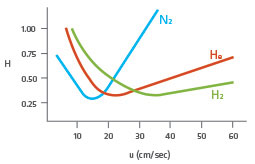 The benefits of switching to hydrogen carrier gas from helium can include improved column separation efficiency over a wider flow range, improved sample throughput and lower running costs. Increased sample throughput without loss of resolution is an attractive feature of using hydrogen for carrier gas that should appeal to contract labs for which reduced overheads and faster chromatography will increase profits.

Hydrogen is often the best alternative to helium for carrier gas, although it can react with analytes under certain conditions. Therefore, chromatographers should be careful when using chlorinated solvents with hydrogen carrier gas because of the risk of hydrochloric acid (HCl) formation, which can affect column efficiency through formation of pores in the stationary phase. However, creative use of the split/splitless inlet pneumatics can allow rapid transfer of analytes onto the column, by minimising formation of HCl in the inlet3. In some MS applications, the reactivity of hydrogen can be used to the advantage of the analyst where protonation of ion fragments can be used in compound identification. 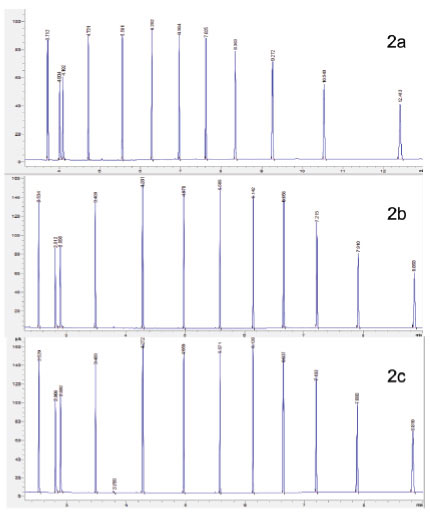 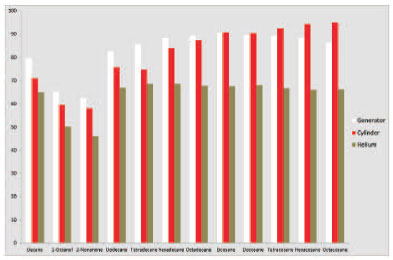 GC analysis is used across the oil and gas industry for hydrocarbon analyses using techniques such as detailed hydrocarbon analysis (DHA) which is a separation technique used by a variety of laboratories to analyse and identify individual gasoline components as well as for bulk hydrocarbon characterisation. Bulk analysis looks at gasoline composition of PONA components (Paraffins, Olefins, Naphthalenes and Aromatics) and other fuels in the C1-C13 range as this gives an indication of overall sample quality.

The analysis of gasoline for spark ignition components is essential for quality control. Because of the complex nature of gasoline samples, resolution between eluents is required and long columns, typically 100m in length, are used. Several methods are routinely used for DHA which differ in their oven temperature ramp rates or in the length of column used. Each method has advantages and disadvantages with some improving peak resolution of low boiling compounds while others provide better resolution of heavier, later eluting compounds. The complex methodology along with the use of long columns means run times can easily exceed 120 minutes when using helium carrier gas. The use of hydrogen, however, can greatly increase sample throughput because of its efficiency at higher linear velocities4. Of course having faster run times counts for nothing if critical separations cannot be achieved, and use of hydrogen carrier gas has been shown to increase run time efficiency whilst maintaining critical DHA separations4. This will appeal to oil analysis laboratories since faster throughput of sample means increased profitability. The benefits of using hydrogen in terms of improved chromatography combined with the increasing cost of helium along with supply issues means that laboratories switching from helium to hydrogen can become much more profitable whilst conforming to industry standards.

We assessed the performance of hydrogen compared with helium and cylinder hydrogen for carrier gas in GC-FID using a Total Petrolium Hydrocarbon Mixture (TPH Mixture 1, Supelco). The TPH mixture contained 10 alkanes which we enriched with two polar compounds, 1-Octanol and 2-Nonanone, in order to assess both polar and non-polar compounds using the different carrier gases. Using a DB-1 column (30m x 0.25mm, 0.25 μm film thickness) we made a split injection (50:1) of 1 μl enriched TPH mixture.

Comparison of the results shows that hydrogen offered a 25% reduction in run time compared with helium (figure 2), with a reduction from 12 minutes to 9 minutes for analysis. Despite the faster sample throughput, there was no loss of resolution, in fact peak shape improved when using hydrogen and analysis showed that hydrogen from both generators and cylinders produced consistently larger peaks than helium (figure 3). We found that in general hydrogen produced significantly larger peaks than helium carrier gas for each of the 12 compounds analysed (data not shown). When looking at the sample variance, results of analysis using carrier gas from a hydrogen generator showed much more uniform results than either cylinder hydrogen or helium (figure 4).

These results clearly show that hydrogen offers a number of advantages over helium for carrier gas in FID analyses. Throughput is increased, peaks are larger and when using a gas generator, results are more consistent. Consistency of results is very important to chromatographers, since samples are not always replicated and it is important to be sure that results from sample to sample are comparable. The results show that hydrogen from generators can produce more consistent chromatographic results than hydrogen or helium from cylinders.

The helium shortage has prompted a number of laboratories to switch from helium to hydrogen for carrier gas. Those who make the switch can see benefits in reduced cost, superior chromatography and faster throughput. 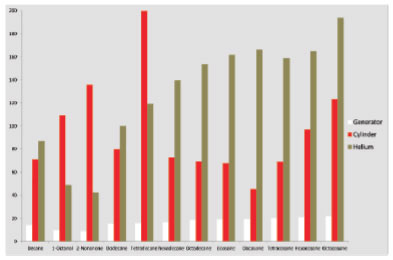 Find out more about Peak Scientific's hydrogen, nitrogen and zero air Precision series generators for GC or contact us.