Labs worldwide have recently found that helium has been in short supply, leaving a number of labs without carrier gas. Added to this, helium prices have doubled over the past 10 years causing a number of labs to look into alternative carrier gases for GC, such as nitrogen and hydrogen. As well as lower price and unlimited availability, hydrogen has a number of potential advantages over helium, including potential for faster throughput, improved chromatography and better sample resolution.

0.5 µL of a 76-compound mixture (Restek Megamix cat. No. 31850) diluted in dichloromethane (DCM) was injected into a hot split/splitless inlet of a Bruker Scion SQ GC/MSD. To increase the amount of sample transferred onto the column and reduce the dwell time in the inlet, in order to reduce the potential for reaction between carrier gas and solvent, pulsed-split injection was performed for 20 seconds. Hydrogen served as the carrier gas at a rate of 1.0 mL/min.

GC and MSD conditions were as follows:

The sample was analysed using the Bruker Scion SQ GC/MSD, which has a lens-free ion source allowing users to easily switch between helium and hydrogen. The inert ion source requires less frequent cleaning and maintains consistent levels of sensitivity.

The results of this technical brief show that by using hydrogen as carrier gas, users can shorten run times compared to helium without compromising peak separation (Fig. 1.). The results also show that hydrogen can improve not only run time efficiency, but signal strength and resolution (Fig 1).

Here we show that by using pulsed-split injection with a high inlet pressure and high split ratio, a fast transfer of sample to the column can be achieved, avoiding the formation of HCl in the inlet through reaction of DCM and hydrogen carrier gas. 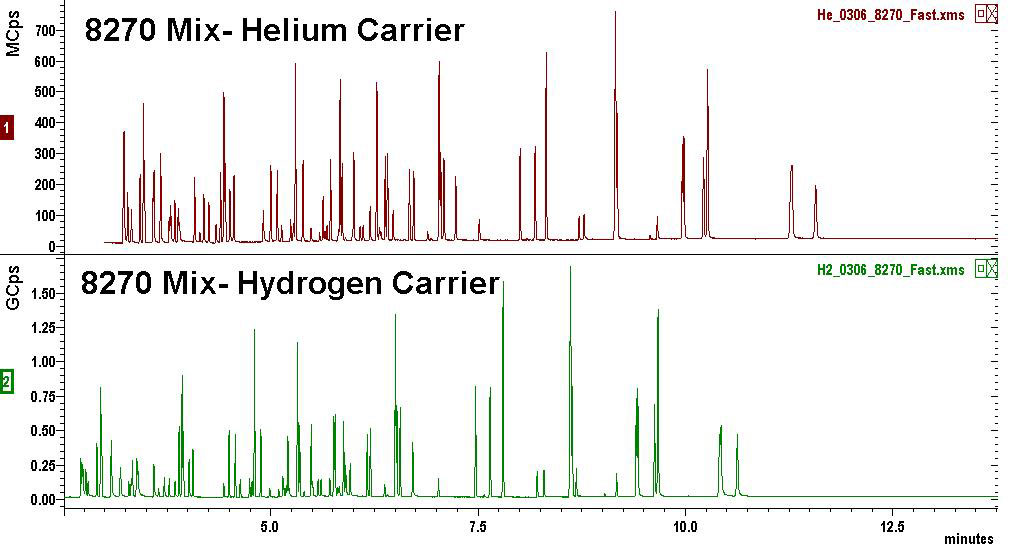 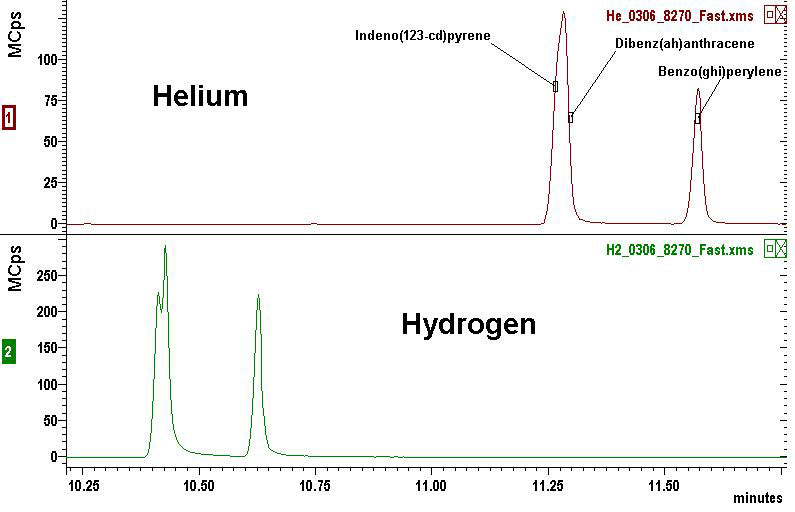 Figure 2 shows that separation of Indeno(123-cd)pyrene and Dibenz(ah)anthracene was also improved by using hydrogen despite faster elution times with hydrogen as carrier gas.

Hydrogen produced by the Peak Scientific Hydrogen Trace generator is a safe and suitable alternative to Helium for GC/MS carrier gas. With the installation of an in-oven Hydrogen leak detector, along with the failsafe mechanisms in place within the generator, lab users can work safely with Hydrogen.

Owing to its potential to form HCl which can cause damage to the inlet and column, chromatographers should be careful when using DCM as a solvent in conjunction with Hydrogen as carrier gas. This experiment shows that it is possible to use Hydrogen as carrier gas for standards and extracts that are required to be in DCM.

SCION-SQ™ is a Trademark of Bruker Corporation.