FAMEs analysis method from helium to hydrogen for GC

Changing carrier gas from helium to hydrogen does not always present an opportunity for faster sample analysis. Method revalidation can be simplified by keeping the new method as close to the old method as possible, which will limit changes to sample selectivity and resolution whilst maintaining the retention times of analytes.

Fatty acid methyl esters (FAMEs) analysis is an important method used across a range of product analyses to characterise fat content. Analysis of FAMEs is conducted in a wide range of products of biological origin including foodstuffs, biodiesels and microbes.  The quantification of FAMEs is usually conducted using gas chromatography with flame ionisation detection (GC-FID) using a highly polar column.

Many labs use helium carrier gas for their GC analysis of FAMEs, but as prices continue to rise, changing carrier supply to hydrogen supplied by a gas generator is becoming more attractive to many analysts. When people consider using hydrogen, faster analysis is one of the features often cited as a reason for switching carrier gas from helium. However, if peaks are poorly resolved, increasing carrier gas flow rate can have the effect of causing peak co-elution. One option that can reduce running costs, in terms of switching to a lower-cost carrier gas, and that avoids the need for major method revalidation is to keep as many method parameters the same as possible.

Here we look at FAMEs analysis of a 38-component standard mixture (Supelco F.A.M.E. mixture Catalogue # 18919-1AMP) with transpalmitelaidic acid methyl ester (purchased from Matreya, Catalogue # 1148)). Figure 1 shows a section of the total chromatogram including the poorly resolved peaks 29-33 in the original method run using helium carrier gas. This method used a carrier flow rate of 34 cms-1 with a 20 mLmin-1 split flow (Table 1).  The results of this analysis suggest that there is little opportunity for increasing sample throughput. However, to see whether a translated method using hydrogen carrier gas would give similar results, the method parameters were kept the same, with only the carrier gas linear velocity altered as a result of changing the gas from helium to hydrogen (Table 1). Figure 2 shows the comparative results of using helium (2A) and hydrogen (2B) carrier gas. The increase in linear velocity resulted in a shorter analysis time, but co-elution of peaks 29-33 meant that method revalidation was required.

The method was revalidated to match the linear velocity of hydrogen with that of the original helium method. This required reduction of the GC head pressure to reduce the flow rate of the carrier gas. This had the effect of reducing peak size because of the reduction of carrier flow rate combined with the relatively high split flow. Peak height was improved by reducing the split flow from 20 mLmin-1 to 5.6 mLmin-1 which increased the amount of analyte transferred onto the column (Table 1).

After revalidating the method to match the linear velocity of hydrogen to the linear velocity of helium in the original method, results were almost identical to those obtained with helium (Figure 3). This meant no reduction in analysis time, but like-for-like results with an increase in peak height of samples run using hydrogen carrier gas because of improved efficiency associated with its use.

Although hydrogen is often cited as a fast carrier gas, it is not always possible to speed up analysis because of lack of peak resolution. Here we have shown that it is possible to revalidate your method by keeping the linear velocity of hydrogen the same as that of helium. This approach will ensure that compounds elute at the same retention time despite a change in the carrier gas. By adopting this approach, you can a column with the same dimensions and will only need to make slight adjustments to the GC method. 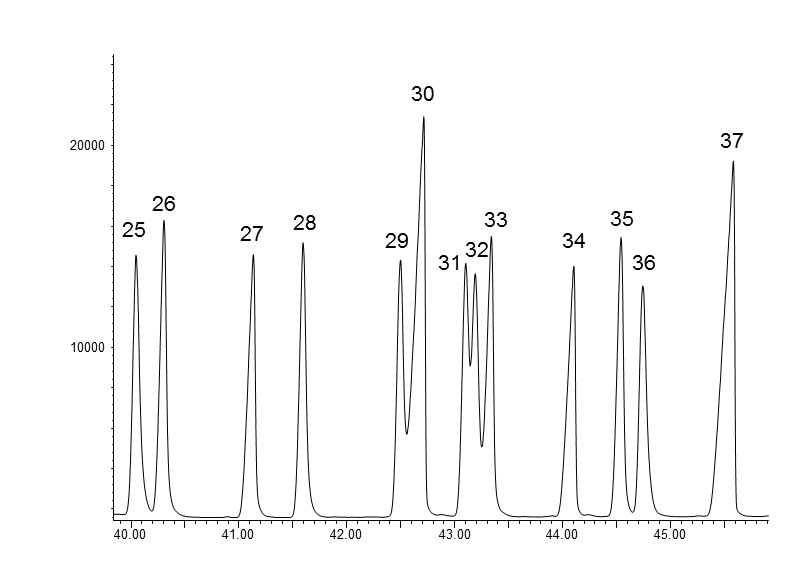 Figure 2. 2A showing a section of the chromatogram produced using the original helium method including poorly resolved peaks 29-33 Figure 2B showing co-elution of peaks 29-30 and 31-33 when running the sample using hydrogen carrier gas at a higher linear velocity.