Owing to the worldwide shortage of Helium, many GC-MS users are now using hydrogen for carrier gas in their GC-MS analyses, however there are still fears about the safety of hydrogen and its reactivity with analytes. This study aims to show that hydrogen carrier gas produced by a hydrogen generator is suitable for GC-MS analyses and that use of hydrogen can give improved chromatographic results compared with helium as carrier gas.

The results of this technical brief show that by using hydrogen as a carrier gas, chromatographers can shorten run times compared with helium without compromising peak separation (Figure 1.). The results also show that hydrogen can improve not only run time efficiency, but signal strength and resolution.

Hydrogen produced by a hydrogen generator is a safe and suitable alternative to helium for GC-MS carrier gas. With the installation of an in-oven hydrogen leak detector, along with the fail safe mechanisms in place within the generator, lab users can work safely with hydrogen.

EPA method 8270 allows for the use of both helium and hydrogen for carrier gas and results from the analysis of the complex mixture show that hydrogen can give superior separation of analytes despite operating at higher linear velocities. The lower viscosity and resulting higher efficiency of hydrogen compared with helium allows for the use of narrower bore columns, which gives chromatographers the opportunity to further improve separation. 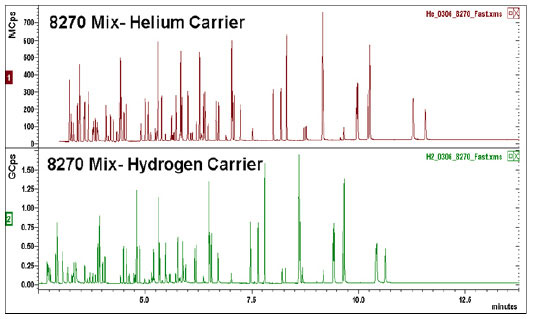 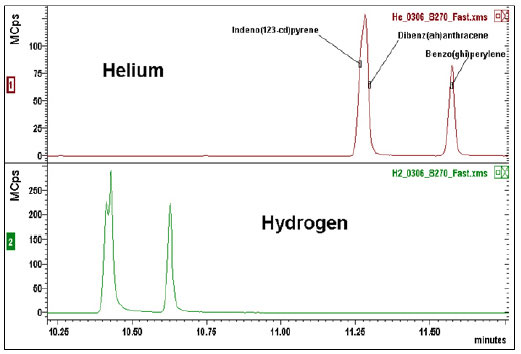 Figure 2. Shows that separation of Indeno(123-cd)pyrene and Dibenz(ah)anthracene was slightly improved by using Hydrogen despite faster elution times with Hydrogen as carrier gas.

SCION-SQ™ is a Trademark of Bruker Corporation.

Find out more about Peak Scientific's hydrogen, nitrogen and zero air Precision series generators for GC or contact us.