Results are used in court to provide quantitive levels of BAC, which makes it one of the most commonly practised analyses in forensic laboratories. The large number of samples and requirement for speed of sample processing mean that analysis needs to be conducted quickly, whilst giving reliable and accurate results.

Alcohol consumption can seriously affect the ability of a driver to operate a vehicle and blood alcohol content (BAC) directly correlates with this impairment. A number of nations have zero alcohol tolerance for motorists, but the majority of countries worldwide have a limit of between 50 and 80 mg alcohol per 100 ml blood, or 0.05-0.08%. Results are used in court to provide quantitive levels of BAC, which makes it one of the most commonly practised analyses in forensic laboratories. The large number of samples and requirement for speed of sample processing mean that analysis needs to be conducted quickly, whilst giving reliable and accurate results.

For analysis of BAC, headspace GC with FID detection is typically used. Headspace GC allows the quantitative analysis of alcohol directly from blood samples. Standard headspace systems use nitrogen for vial presurization, with helium typically used for GC carrier gas. This application note looks at the use of nitrogen for both vial pressurisation and GC carrier gas. Nitrogen offers a cost-effective, abundant alternative to helium for carrier gas, whilst giving similar performance. Here we compare analysis of real forensic blood samples, taken from motorists suspected of driving under the influence of alcohol, analysed using nitrogen and helium carrier gas.

Analyses were conducted using an Agilent 7890B GC with split/splitless inlet and dual columns each connected to an FID detector. Splitting of the samples onto the columns was via an Agilent unpurged Capillary Flow Technology splitter. The GC was coupled with an Agilent 7697A headspace sampler. Vial pressurization gas for all tests was provided by a Peak Scientific Precision Nitrogen Generator. Carrier gas was provided by either helium cylinder or the Precision Nitrogen Standard Generator. The HS-GC-FID system operating conditions are displayed in Table 1.

Calibration curves produced with helium and nitrogen carrier gas both gave very good linearity with both curves having R2 values of 99.9999 (Figure 1). Blood alcohol levels of 5 blood samples were analysed. 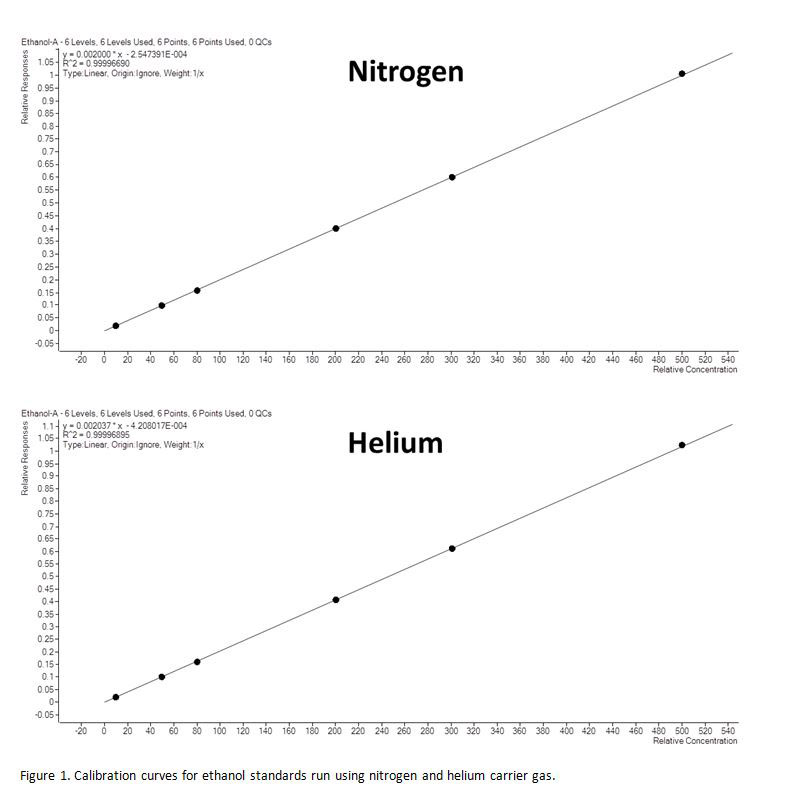 Figures 2 and 3 show chromatograms from the DB-ALC1 and DB-ALC2 columns, respectively for the separation and elution order of analytes for the multi-component resolution mix when run using nitrogen and helium carrier gas. Separation of potentially interfering components, such as methanol and 2-propanol was achieved within 3 minutes when using either carrier gas (Figure 2 & Figure 3). 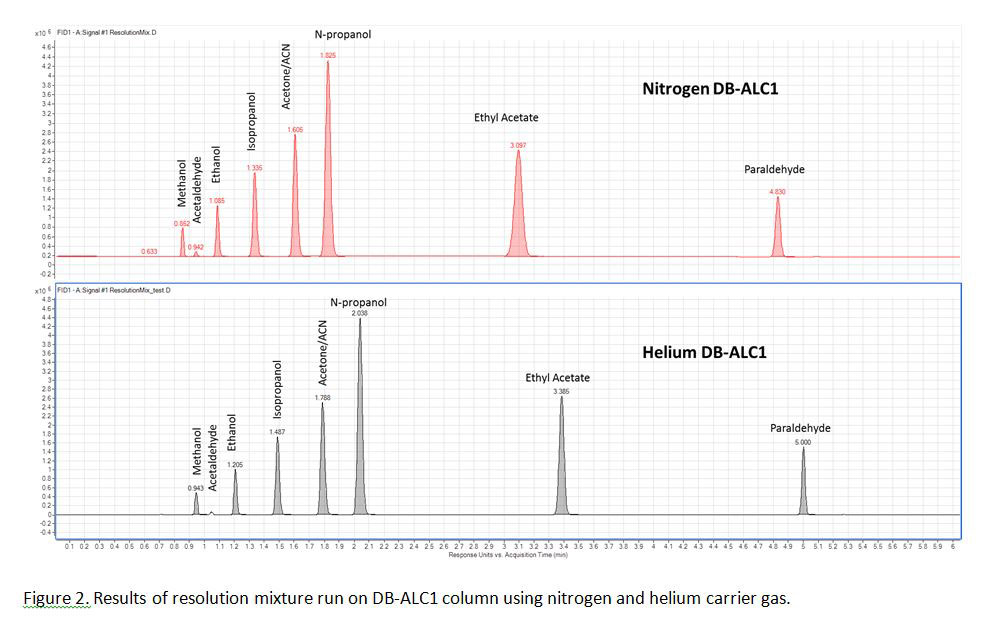 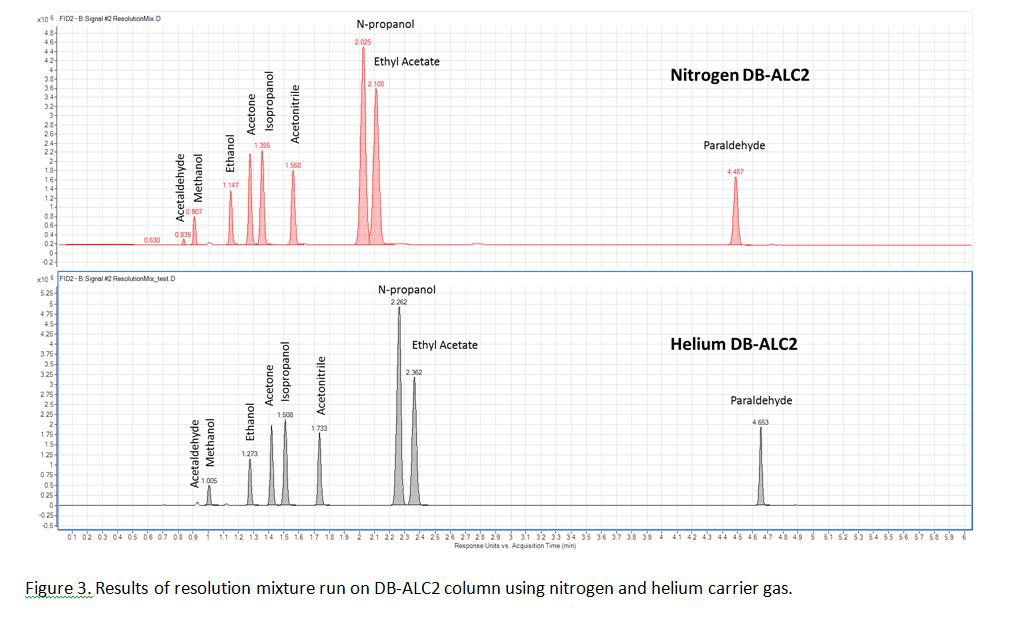 Results of analyses of real blood samples (analysed in duplicate) run with both nitrogen and helium carrier gas gave equivalent results with no differences found in the calculated ethanol concentrations (Table 2).

Results of BAC analysis show that there is no difference in the linearity of the calibration curve, or of the calculated ethanol content of real blood samples regardless of whether nitrogen or helium carrier gas was used.

As an abundant, inexpensive alternative to helium, which is becoming increasingly more costly, there is no reason why nitrogen cannot be used for BAC analysis in place of helium. Since nitrogen is often used for vial pressurisation in headspace samplers, the use of a single gas source for vial pressurisation, carrier gas and FID make-up gas simplifies the lab’s gas sourcing and would allow total gas supply from gas generators if the Precision Nitrogen was used in conjunction with the Precision Hydrogen and Zero Air generators for GC-FID analysis.