Researchers from Prof. Guido Verbeck’s group at the University of North Texas (UNT) carried out analysis of drugs of abuse (DOA) and explosives using an ion trap GC-MS to compare results when using helium and hydrogen carrier and buffer gas. As well as comparing the two gases, the group also assessed a number of ion volumes with different orifice diameters to look at their effect on sensitivity with either gas.

With hydrogen increasingly being used as an alternative to helium for a number of GC analyses, this study will be of particular interest to forensic scientists analyzing DOA and energetic materials by GC-MS. Download the paper, published in the journal Science & Justice.

Analysis was conducted using a Thermo Focus GC with a Polaris-Q MS fitted with a 1 cm quadrupole ion trap, allowing replacement of the ion volumes without breaking vacuum. Helium was supplied via a helium tank and hydrogen supplied by a PEAK Scientific Precision Hydrogen Trace 500cc generator. Ion volumes with exit orifice diameters of 1,2,4,6,8 & 10mm were machined for use in the Polaris-Q MS. 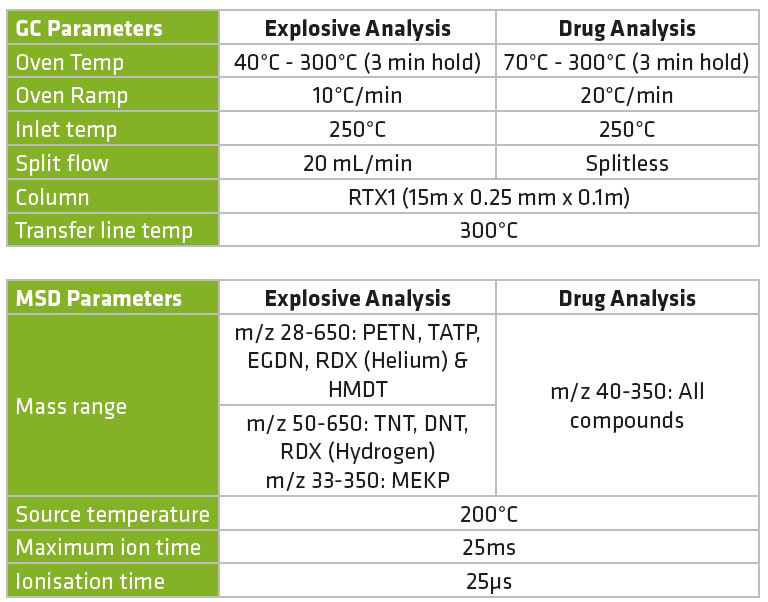 To find out more about PEAK Hydrogen generators
Click Here

Drug analysis. No difference was observed in the ion spectral patterns of cocaine, phenolbarbitol, codeine or oxycodone. Even though these compounds have electron rich nitrogen and oxygen species, their fragmentation patterns remain unchanged regardless of carrier gas used. Of the drugs tested, only diazepam showed a different fragmentation pattern depending on whether Hydrogen or Helium was used.

Explosives analysis. Of the 8 explosives analyzed, PETN, TATP, EGDN and RDX exhibited no difference in fragmentation. TNT, DNT, MEKP and HMTD did display some difference in fragmentation pattern when run with hydrogen compared with helium.
Effect of Ion volume on sensitivity. All 6 ion volume sizes (1,2,4,6,8 & 10mm) were assessed for each compound with both hydrogen and helium carrier gas (figure 1A & 1B). Cocaine’s primary fragment (m/z 182.04) was used to compare intensities of each ion volume size using hydrogen and helium. Results showed the 10mm ion volume produced the highest intensity for both hydrogen and helium carrier gas, with the 6mm ion volume producing the lowest intensity. The other ion volume orifice results were inconsistent between the two carrier gases.

Results from the analysis of drugs and explosives show that the majority of compounds did not fragment differently regardless of whether hydrogen or helium carrier gas was used. The advantages that hydrogen offers as a cheap carrier gas include faster, improved analysis compared with helium, make these results even more attractive to labs analyzing drugs and explosives. 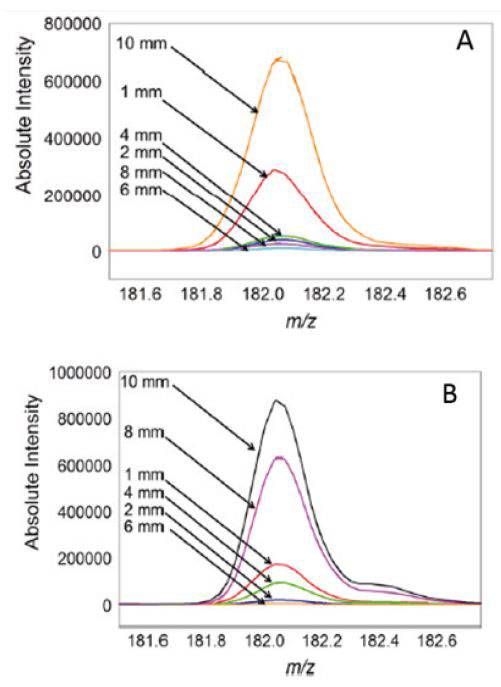 Figure 1. Effect of ion volume orifice on signal intensity of Cocaine’s primary fragment ion (m/z 182.04) when used with helium (Figure 1A) and hydrogen (Figure 1B).

Ed Connor Dr.Sc. is a GC-MS Application Specialist, PEAK Scientific, Inchinnan Business Park, Scotland, UK . Prior to joining PEAK, Ed completed his Dr.Sc. at ETH Zurich in Switzerland using GC-MS to look at herbivore induced plant volatiles and their interaction with beneficial insects. He then joined the University of Zurich where his work focused primarily on volatile
collection methods and analyses using GC-MS and GC-FID.

To find out more about PEAK Scientific's hydrogen, nitrogen and zero air Precision series generators for GC click here or contact us.