Gas chromatography–mass spectrometry (GC–MS) allows isolation and identification of individual analytes within a complex mixture. Helium has traditionally been the first-choice carrier gas, owing to its inertness, performance, and relatively cheap price. Since 2001, however, helium has become increasingly expensive with a reported global increase in price of 500% between 2001 and 2016 (1). In 2012–2013, the global helium shortage increased the number of GC users switching to alternative carrier gases and improved the availability of information on their use.

Hydrogen is half as viscous as helium at the same temperature and pressure, while the diffusion of a sample within the two gases is similar, meaning that hydrogen travels through the GC column more quickly and offers faster analysis than helium. The van Deemter curve (Figure 1) shows the relative efficiencies of hydrogen, helium, and nitrogen at different flow rates and shows how hydrogen has superior column efficiency at higher flow rates. Using method translation software (2,3), it is possible to model the effect of converting a method from helium to hydrogen in silico to see what time savings can be made and what changes to the method are required.

To overcome concerns about sensitivity reduction and stabilization times associated with hydrogen carrier gas, hardware changes such as increasing the draw-out lens orifice diameter and baking out the ion source can be conducted. Following analysis of an essential oil mixture run using helium carrier gas with a standard ion volume and hydrogen carrier gas using a larger diameter draw-out lens across a range of flow rates, stabilization time, peak resolution, and signal-to-noise ratio were assessed. 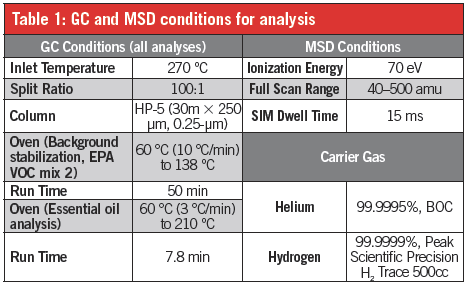 Background stabilization was assessed by running a volatile organic mixture for 7 days following change of carrier gas. The ion source was baked-out using a slight modification of recommendations (p35–37) by Agilent Technologies (4), with the source temperature set to 300 °C and filament switched on for a period of 3 h. 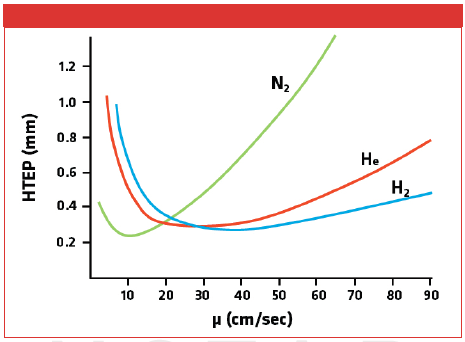 Effect of Carrier Gas on Signal to Noise: Signal to noise (S/N) and resolution (Rs) were calculated using 1,3,5-trichloro benzene, the last eluting peak of an essential oil mixture (Table 2). Samples run with helium carrier gas in full scan mode showed an inverse relationship between flow rate and S/N, with S/N dropping from 1988.3 at the optimal 1.0 mL/min flow rate to 864.9 at 2.0 mL/min (Table 2). When running samples using hydrogen carrier gas, the opposite relationship between flow rate and S/N was found, with S/N increasing from 106.0 to 209.6 as column flow increased (Table 2).

In SIM mode, there was little variation in S/N regardless of flow rate when using helium carrier gas. However, with hydrogen carrier gas, S/N improved with increasing carrier flow rate, with the S/N increasing from 798.8 at 1.0 mL/min to 2359.3 at 2.0 mL/min, meaning that S/N with hydrogen at higher flow rates was almost the same with helium (Table 2). 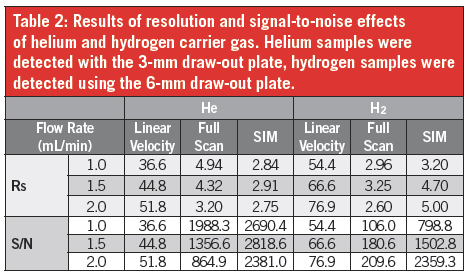 Effect of Carrier Gas on Resolution: In full scan mode, helium carrier gas followed a similar pattern to S/N results, with Rs decreasing as flow rate increased beyond the optimal velocity. When running samples using hydrogen, there was no clear relationship between Rs and flow rate, with the best resolution seen at 1.5 mL/min. When comparing the optimal flow rates of each gas (1.0–He and 2.0–H2), peak resolution with helium carrier gas was almost double (1.9×) that of hydrogen (Table 2).

Background Stabilization: Results showed that background was stable after 3 days, with repeated injections of the EPA VOC mixture being tested for 7 days (Figure 2).

A number of applications use hydrogen carrier gas as a viable alternative to helium. The results of GC–MS when comparing Rs and S/N appear to correspond directly to the carrier gas flow rate relative to the optimal carrier gas velocity of both gases. At an optimal column flow of helium, the best performance for both Rs and S/N were observed in full scan mode. SIM detection appeared to overcome some of the problems of reduced carrier gas efficiency of helium at higher velocities, with little difference found in either Rs or S/N across the range of flow rates tested. Similarly to helium, running samples with hydrogen carrier gas at a suboptimal flow rate affected Rs and S/N significantly in both scan mode and SIM mode. Interestingly, hydrogen carrier gas showed better peak Rs in SIM mode than helium across all three flow rates. It appears that running in SIM mode largely eliminates background noise that causes interference in full scan mode when using hydrogen. When following the recommendations for preparation of the system when switching to hydrogen, background signal will take at least 3 days to stabilize.
This study clearly demonstrates that hydrogen can be used for routine analysis of known compounds. When using full scan mode, analysts need to be aware that they are likely to see a two- tofivefold reduction in sensitivity (4). When using hydrogen carrier gas for GC–MS, it is essential to initially focus on mitigation of factors causing reduced sensitivity. 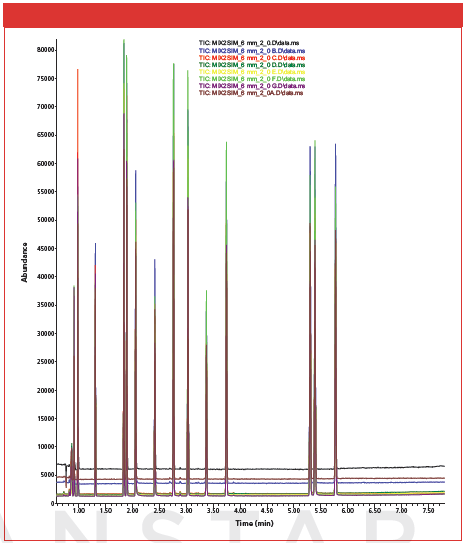