The International Union of Pure and Applied Chemistry (IUPAC) has proposed names for the four new elements which were verified in December last year.

The newly discovered elements and announcement of the four names now means the seventh row of the periodic table is complete. The discoverers were invited to propose names for the new elements and submit them to IUPAC for verification. The new proposed names are:

So… what do these names mean and what criteria must be followed in order to pick a name for a new element? 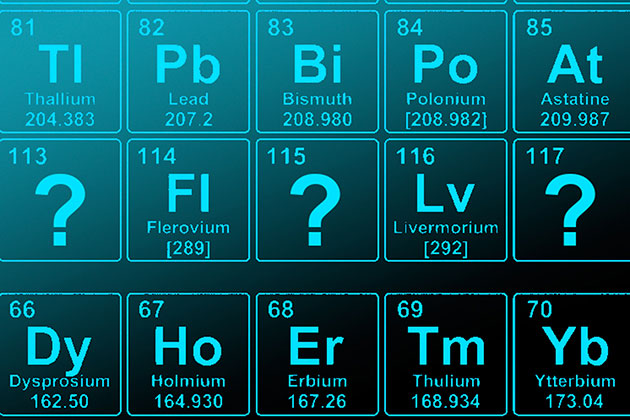 IUPAC have recently updated the guidelines for the naming the elements  and keeping with tradition, newly discovered elements can be named after:

(a) a mythological concept or character (including an astronomical object)

(b) a mineral or similar substance

(c) a place, or geographical region

(d) a property of the element

With this being the case the discoverers came up with the above names and the reasoning behind them:

Nihonium is named after nihon, one of the two ways to say Japan in Japanese. Elements 115 and 117 are named after Moscow and Tennessee following collaborations between scientists in these areas. Organesson was named after Professor Yuri Organessian for his work on super-heavy elements and is only the second person to have had an element named after them whilst still alive.

Now that IUPAC has reviewed, considered and recommended these names for acceptance. A five-month public review is now set with the new names to be formally approved by the 8th of November 2016.

Do you have any suggestions? Post in the comments section below.

The evolution of laboratory gas

Scientists give PEAK their seal of approval