Robin MacGeachy, Managing Director of Peak Scientific, has been awarded the EY UK Entrepreneur of the Year Award for Manufacturing.

The EY Entrepreneur Of The Year™ programme is considered the world's most prestigious business award and is held in more than 145 cities and in more than 60 countries worldwide. This overall UK award in the manufacturing category for Robin follows similar recognition earlier this year in the Scotland regional awards.

Robin was unfortunately unable to attend the glittering awards ceremony in person, however Peak Scientific’s Sales and Marketing Director, Jonathan Golby accepted the award in his absence.  Jonathan provided some words of gratitude on Robin’s behalf and expressed how proud he was to be working in such a dynamic and thriving company.  He stated:

“Being part of Peak Scientific is really something quite special.  We are a dynamic company and our products play a key role in enabling our customers in the field of drug discovery, vaccine research, food safety and many other important laboratory applications.  Manufacturing is something we take very seriously and all our gas generators are hand built and performance tested at our headquarters based in Scotland.”

This prestigious award for Mr MacGeachy, strongly contested by business leaders operating in a myriad of different sectors, underlines the important and vitality of the analytical science industry within the overall economy and reinforces Peak Scientific’s credentials as a progressive leader in its field. 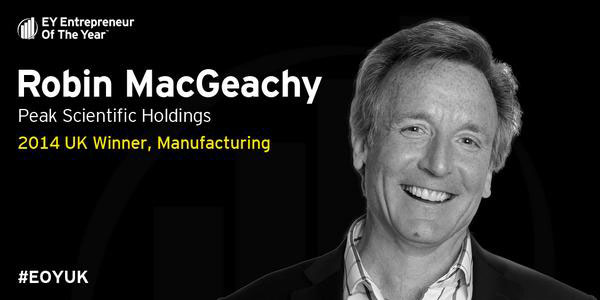