To celebrate this holiday season, we are taking a look at an interesting compound, Penguinone.

Penguinone, or to give it its full name 3,4,4,5-tetramethylcyclohexa-2,5-dien-1-one, is an organic compound. It is easy to see why it was renamed in the first instance but the name Penguinone is actually derived from the compound's molecular structure which has a striking resemblance to that of a Penguin, see for yourself: 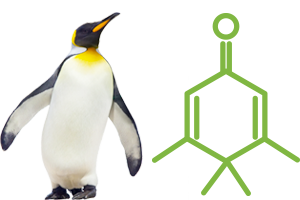 The suffix -one and C=O double bond indicate that Penguinone is a ketone. Ketones tend to absorb strongly in the infra-red spectrum and their peaks are determined by the other constituents of the particular ketone being analysed. To identify ketones in analytical chemistry, Carbon Nuclear Magnetic Resonance Spectroscopy is often the most effective method. For labs using NMR, PEAK's hydrogen gas generators can supply parahydrogen generators to enhance magnetic resonance (MR) signals of target molecules in NMR analysis.

Penguinone is also a dienone meaning its molecular structure is suitable for dienone phenol rearrangement. However, the methyl groups in position 3 and 5 of the ring obstruct the movement of the group at position 4 thus preventing the rearrangement to a phenol from occurring.

Penguinone has very little use commercially or in industry, however, we thought it very fitting to give it some attention at this time of year. It has been speculated that it could be used in drug development in the future but that is nothing more than mere speculation at this point.

What do you think of Penguinone? Do you think it will ever be more than just a funny chemical name? Tell us in the comments section below.