New Year's Eve traditions from around the world

As one year ends and a new one begins, people around the world do very strange things... 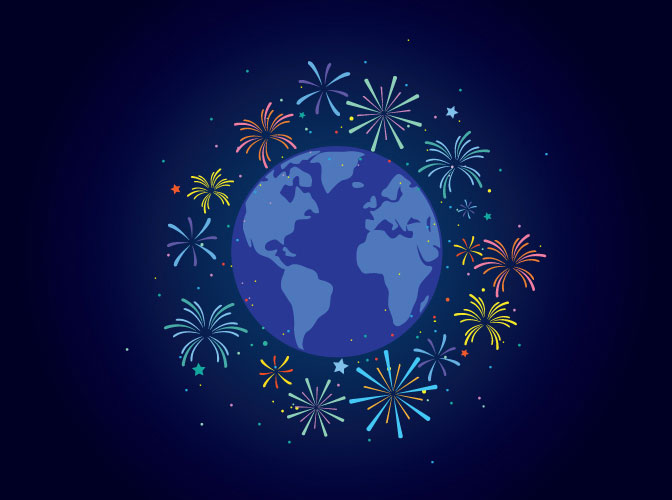 On New Year's Eve people party to celebrate the coming year, make resolutions to improve their lives and wish each other a Happy New Year. Most will hope for good luck in the New Year, but some do more than hope; participating in strange superstitions and traditions to try and make their own luck. The list below details 10 popular New Year's Eve traditions from around the world:

In Scotland it is thought to bring luck if the first person to cross over the threshold after midnight brings a gift. It is even luckier if the person bringing the gift is a tall dark haired male, apparently.

Buddhist temples all over Japan ring their bells 108 times at midnight on New Year's Eve to dispel the 108 evil passions all humans have, according to Buddhism.

In order to encourage a year of wealth and prosperity, people in the Philipines surround themselves with round things to represent coins. Round food is eaten and wearing polka dots is popular.

It is traditional in Spain to eat 12 grapes on New Year's Eve, one for each month of the coming year. One grape must be eaten with each strike of the bell at midnight to secure prosperity in the coming year.

Many Belgian farmers wish their animals a Happy New Year, and why not?

Out with the old, in with the new

On New Year's Eve, Italian streets are littered with unwanted items as the tradition there is to throw old household items out of windows to symbolize readiness for the new year.

In Singapore people write their wishes and put them inside white spheres which are then released onto the Singapore River.

It is traditional in Greece to hang an onion on your front door on New Year's Eve. The onion is then tapped on the heads of any children in the house on New Year's Day to wake them up.

In Turkey people sprinkle salt on their doorstep at midnight to bring peace and prosperity to their home or business.

Happy New Year from all of the team at PEAK!