This week saw the announcement of four new elements added to the Periodic Table, completing the seventh row.

The four new elements are temporarily named ununtrium (Uut), ununpentium (Uup), ununseptium (Uus) and ununoctium (Uuo) using the latin name for the element number, for example the "ununsept" in ununseptium is the latin for 117 as this is element 117. They will be named at a later date using a naming convention where elements are named after a mythical being; a mineral; a place; a property of the element; or a scientist. 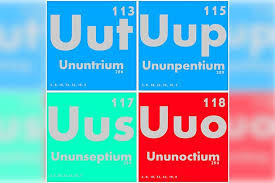 The main benefit of these new elements is said to be their influence on atomic structure research which may lead to the discovery of further elements which are more stable and may have unique and interesting properties. This is certainly on the mind of Kosuke Morita, leader of the Japanese research team, “Now that we have conclusively demonstrated the existence of element 113, we plan to look to the uncharted territory of element 119 and beyond, aiming to examine the chemical properties of the elements in the seventh and eighth rows of the periodic table.”

The latest additions to the table were discovered by researchers in Japan, Russia and the USA who collided lighter nuclei into one another creating new super heavy elements. These elements only exist for a fraction of a second and then disperse into lighter atoms. The discoveries have been recognised by industry bodies The International Union of Pure and Applied Chemistry (IUPAC) and the International Union of Pure and Applied Physics (IUPAP).

These are the first new elements for the Periodic Table since 2011 when flerovium and livermorium were added.