In a recent article published in BioTechniques, titled: Democratizing Mass Spectrometry, author Jeffery Perkel indicates that; mass spectrometry is often seen as a complicated and highly technical technique that requires years of experience to master.

In the article Perkel discusses the best way for novices to approach mass spectrometry experiments such as attending courses at facilities that offer open-access to instruments and step by step training to master key techniques.

Basic training can take around 30 minutes and is structured around sample preparation and basic instrument operation. Trainees are made aware of small errors that can cause a knock on effect to analysis such as: improperly filtered samples clogging narrow fluidics and samples that are too concentrated which can leave residue inside the instrument and spoil the downstream experiments.  However, even though training facilities are available and mass spec companies have worked hard to make the ‘software more straightforward’, many still opt for bypassing the learning altogether and instead send their samples to a research facility that analyses the sample and send back the results.

For those who are willing to learn the techniques and carry out the analysis on their own they must ensure, training aside, that they have the correct tools for the job. Scientists and lab researchers need to focus on the preparation of their sample and the final result. In most cases the gas that feeds their mass spec is often the least of the scientists’ worries - that is until they run out of gas mid analysis.

Gas for your mass spec can be provided in various ways; by cylinders, bulk storage or by a gas generator. Traditional gas methods such as gas cylinders have been used for many years and have caused scientist many headaches such as, constant monitoring to avoid running out, manoeuvring empty cylinders and replacing for new ones, storage - taking up valuable workspace and serious health and safety risks as gas is stored at high pressure and in large volumes. Due to some of these factors many scientists have decided to remove the stress and worry of lab gas by switching over to a gas generator.

A gas generator can give you an uninterrupted supply of gas to your mass spec at a consistent, steady flow. The generator provides gas on-demand; meaning no more running out of gas during important analysis. Once installed, the generator requires minimal maintenance and eliminates any safety concerns that surround cylinders as there is minimal gas stored, at a low pressure. 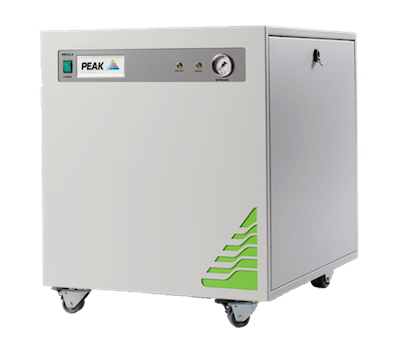 Peak Scientific have a host of laboratory gas generators for LC-MS applications. The Genius series are compressor based nitrogen systems that come in various flow rates and can be coupled to most mass specs on the market today. The Infinity series of laboratory gas generators are compressor-less nitrogen systems which have been engineered to provide gas to labs which already have an external source of air, and again is suitable for most mass spectrometers available on the market. No matter what your LC-MS application, Peak can remove any hassle associated with gas allowing you to focus on your analysis.

To find out more about nitrogen gas generators
Click Here