In the past, helium has been the carrier gas of choice when it came to gas chromatography & mass spectrometry (GC-MS).

However, in recent years, helium shortages and subsequent rises in prices have been responsible for furthering the discussion on alternatives to what is an increasingly expensive and finite source of gas for GC analyses. This in turn has led to the growing use of hydrogen – a much debated alternative to helium, that has increasingly demonstrating its superior properties as a GC carrier gas and subsequent benefits to laboratory based research.

Hydrogen is not only the most abundant element in the universe, it is also readily available on Earth as a constituent of water & hydrocarbons. In terms of GC carrier gas, hydrogen offers laboratories an equivalent level of sensitivity to helium but allows for faster speed of analysis, which can lead to an overall improvement in workflow. Furthermore, as H2 generators only produce hydrogen on demand and in very small quantities, they are significantly safer than high pressure cylinders. These facts were further demonstrated by Shimadzu in a recent research paper, where they performed a simultaneous analysis of 59 pesticides via GC-MS, utilising hydrogen as carrier gas. Hydrogen for the analysis was obtained from a Peak Precision Hydrogen Trace Generator and this was used to supply carrier gas to GCMS-QP2020. The method used was created via the EZGC Method Translator, available online from Restek Corporation – a tool built specifically for gas chromatography method development which can ultimately help simplify the process of switching carrier gas.

Shimadzu’s experiment was able to confirm that with some relatively simple modifications (changing column length to 20m and converting method for hydrogen with the aforementioned method development tool), it was possible to reduce the analysis time by at least 10 minutes without any losses in overall sensitivity. Whilst this may not seem like a lot, it is clear to see how over the course of a day, week or month of analysis work, time saving can significantly improve productivity. Shimadzu observed that Peak’s Precision Hydrogen Trace generator performed well as a source of carrier gas and would ultimately lead to a significant reduction in costs, as well as increased safety within the laboratory environment. 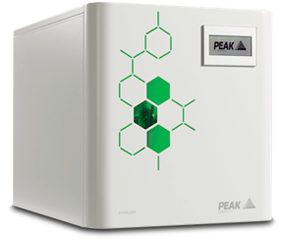 To find out more about Peak hydrogen generators
Click Here

Wikipedia - Abundance of the chemicals elements